SHOCKING POLL! Amnesty for Dreamers is a no-go for the Trump base, most favoring immediate deportation with no offer of amnesty

Photo, above: Dreamers. Should they be thrown out of the country?

Polling, including Powdered Wig’s own polling, indicate that most Trump supporters prefer a hard line immigration policy regarding Dreamers which includes deportation with no offer of amnesty. I have not been one of those in favor of this extreme approach, although I agree with many points within the hard line position.

Trump supporters are closely tracking the immigration debate and trust him to follow-through with campaign promises, but will not support him if he pursues a deal that includes Amnesty.

In a poll from Ear to the Ground, their polling tracked closely with that of our own internal polling….

“Trump supporters have not waned in their confidence that the President will follow-through on his campaign promises, and now we have insight into why they feel immigration is so important. A great part of their motivation is shown to be a concern over security of our nation and fitting in with the American culture, not solely self-sufficiency”  –Anne Sorock, Executive Director of Ear to the Ground 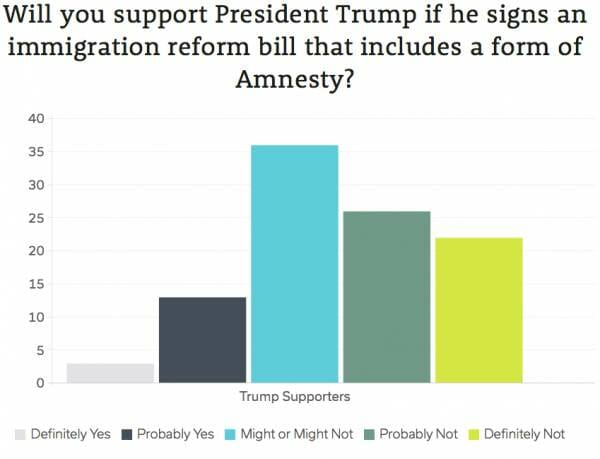 These results match Powdered Wig’s own polling fairly closely. Although our question was phrased differently, our polling reflected 52% in favor of the hard line option of “No pathway period. Immediate deportation,” while 48% favored some form of amnesty, but no pathway less strict than that which legal immigrants must follow to become American citizens.

Our poll is still active, so it may change. However, we expect it track in proportion to existing poll percentages. Link to that article…. President Trump supports a pathway to citizenship

It was the lure of additional voters that caused this problem in the first place, the Democrat Party inviting illegal immigrants into the country, knowing they are likely to vote Democrat, while three presidents, Clinton, GW Bush, and Barack Hussein stood by and watched, Clinton and Hussein actively promoting more illegal immigration.

President Trump has an extremely tough call to make.

Which of the following pathways to citizenship for Dreamers would you support? in Thomas Madison’s Hangs on LockerDome