Officials at one York County high school have had a change of heart about not allowing a student to display his American flag on the bed of his truck afer dozens of students, community members held a peaceful protest.

The controversy started Wednesday when Peyton Robinson said a school administrator at York Comprehensive High School had a problem with the display when he arrived at school Wednesday morning.

Robinson, 18, has displayed the United States flag along with POW-MIA flags on the bed of his truck.

“He was like, ‘We’re having people say stuff about your flag and I just wanted to ask you to take it down,’” Robinson said.

That administrator called him outside and by the time he got to his truck, the flags were already down, he said.

“It just kind of upset me and aggravated me,” Robinson said.

At the end of the day, officials announced to everyone that the flags were a safety concern.

On Thursday, school officials released a statement saying they will allow the American flag to fly as long as it doesn’t create a driving hazard.

“Due [sic] to the outstanding display of patriotism through peaceful demonstration, it is apparent to us that many are not happy about this policy,” the statement read. “School officials have reviewed the standing policy regarding flags and have decided that an exception will be made for the American flag, as long as the size of the flag(s) does not create a driving hazard.”

The South Carolina Highway Patrol told Channel 9 that the flags that the York students are flying are legal in the roadway. 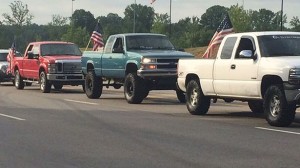 VP Harris Gets Out of Gas-Guzzling SUV and Onto Private Jet to Fly to Event on ‘Climate Crisis’
October 21st, 2021 Flag And Cross