Karma? Divine retribution? On 9/11 over 100 dead, 200 injured in the Grand Mosque in Mecca following lightning strike and crane collapse

(9/11/2015) Over 100 Muslim worshipers are dead, and 200 injured in Mecca, Saudi Arabia, following a lightning storm, which caused a construction crane to collapse on hundreds of worshipers in the Grand Mosque, just days before Hajj, the annual pilgrimage to Mecca, which is attended by millions of Muslims every year.

As though the coincidence of the date of the tragedy (9/11) were not enough, it has been revealed that the construction crane causing the tragic incident was owned by the Saudi Binladin Group, which was founded by Osama Bin Laden’s billionaire father, Mohammed, and which has been contracted to expand the Grand Mosque. 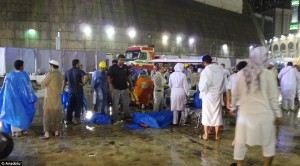