From the archives. Old story but still awesome! Somali pirates get a big surprise when they mistakenly try to hijack a Navy missile frigate

Here’s the background. It’s a hot and lonesome midnight in 2010 on the open ocean east of Somalia, when a group of Somali pirates, looking for an easy target, detect a large vessel on the horizon. Because it is so dark and they are so hungry for an easy ransom, they mistakenly believe the vessel to be a defenseless merchant ship.

Instead, it is the USS Nicholas, a US Navy guided missile frigate, which is undertaking pirate interdiction operations, and had been tracking the pirates for some time. The Somalis opened fire on the Nicholas, which returned fire, boarded the pirate boat, capturing all pirates on board, then sinking the boat, and capturing its mother ship.

LOL! You just can’t make this stuff up. 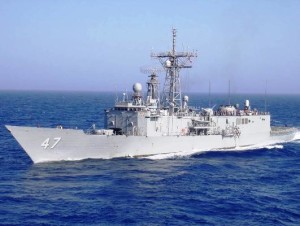 From Wikipedia: “On 1 April 2010, Nicholas came under fire from Somali pirates while deployed in the waters off of East Africa near the coast of Kenya and Somalia conducting anti-piracy operations. Nicholas seized five pirates, sank their skiff and captured a pirate mother ship.[1] The pirates were tried in the U.S. and convicted of piracy, which carries a mandatory life sentence.[2][3] Five Somali men were sentenced to life plus 80 years in prison for engaging in piracy and related offenses in last year’s attack on a U.S. warship in the Indian Ocean. In November, a federal jury in Virginia convicted the Somali men – Mohammed Modin Hasan, Gabul Abdullahi Ali, Abdi Wali Dire, Abdi Mohammed Gurewardher and Abdi Mohammed Umar – of piracy, attack to plunder a vessel, act of violence against persons on a vessel, assault with a dangerous weapon, assault with a dangerous weapon on federal officers and employees, conspiracy to use firearms during a crime of violence, and multiple firearm counts, including the use of a rocket propelled grenade.”[4]