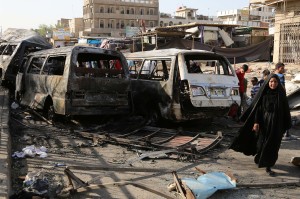 Obama’s Mideast ‘free fall’
Mounting chaos in the region puts the administration on the defensive.

Barack Obama faces a slew of Middle East crises that some call the worst in a generation, as new chaos from Yemen to Iraq — along with deteriorating U.S.-Israeli relations — is confounding the president’s efforts to stabilize the region and strike a nuclear deal with Iran.

The meltdown has Obama officials defending their management of a region that some call impossible to control, even as critics say U.S. policies there are partly to blame for the spreading anarchy.

“If there’s one lesson this administration has learned, from President Obama’s 2009 Cairo speech through the Arab Spring, it’s that when it comes to this region, nothing happens in a linear way — and precious little is actually about us, which is a hard reality to accept,” said a senior State Department official.

Not everyone is so forgiving. “We’re in a goddamn free fall here,” said James Jeffrey, who served as Obama’s ambassador to Iraq and was a top national security aide in the George W. Bush White House.

For years, members of the Obama team have grappled with the chaotic aftermath of the Arab Spring. But of late they have been repeatedly caught off-guard, raising new questions about America’s ability to manage the dangerous region.

Obama officials were surprised earlier this month, for instance, when the Iraqi government joined with Iranian-backed militias to mount a sudden offensive aimed at freeing the city of Tikrit from the Islamic State in Iraq and the Levant. Nor did they foresee the swift rise of the Iranian-backed rebels who toppled Yemen’s U.S.-friendly government and disrupted a crucial U.S. counterterrorism mission against Al Qaeda there.

Both situations took dramatic new turns this week. The U.S. announced its support for a Saudi-led coalition of 10 Sunni Arab nations that began bombing the Houthis, while Egypt threatened to send ground troops — a move that could initiate the worst intra-Arab war in decades.