VIDEO: King Hussein vows to close GITMO. Generals and admirals not amused, refuse to applaud, staring down the Fraud-in-Chief

“So it makes no sense to spend three million dollars per prisoner to keep open a prison that the world condemns and terrorists use to recruit. Since I’ve been President, we’ve worked responsibly to cut the population of GTMO in half. Now it’s time to finish the job. And I will not relent in my determination to shut it down. It’s not who we are. It’s time to close Gitmo.”

Really? It’s not who we are? This from the emperor of the country that leads the world…BY A LONG SHOT… in per capita incarceration of its own citizens? Lock little Johnny up for possession of a joint, but by all means release Abdul Mohammed Goatfuk to return to the battlefield to kill more young American heroes. WTF is the matter with you, Hussein?!

At the end of the video, watch closely the generals and admirals who lead those young heroes who may become the victims of Abdul Mohammed Goatfuk as they refuse to join the applause for King Hussein. It looks like they are trying to burn holes through his $20,000 suit with their eyes.

It was good to see the First Lady came prepared, just in case a square dance broke out in the middle of her husband’s State of the Union Fantasy. 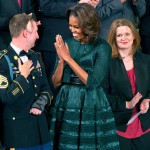