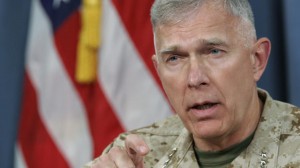 By Jamie Weinstein, The Daily Caller

The man who was the top Marine general from 2006 until his retirement in 2010 says President Barack Obama’s strategy to defeat the terrorist group the Islamic State in Iraq and Syria is doomed to fail.

“I don’t think the president’s plan has a snowball’s chance in hell of succeeding,” retired Marine General James Conway, who served as the 34th Commandant of the Marine Corps during the end of the Bush administration and the beginning of the Obama administration, said at the Maverick PAC Conference in Washington, D.C. Friday, according to a source in attendance.

The source said Conway’s major concern was that the U.S. did not have a force on the ground in Syria it could rely on, like the Kurdish Peshmerga in Iraq. Though the Obama administration believes it can support what it says are moderate rebel forces in Syria to aid in the fight against ISIS, many critics warn that there may be no truly moderate force in the country of any significant strength. (RELATED: Expert Who Traveled With Syrian Rebels Says So-Called “Moderates” Are Muslim Brotherhood-Style Islamists)

The Commandant of the Marine Corps also serves as a member of the Joint Chiefs of Staff. During the 2003 Iraq War, Conway led the 1st Marine Expeditionary Force.

Obama’s strategy to degrade and destroy ISIS has come under fire in recent days for other reasons as well, especially for preemptively taking off the table the possibility of using American combat troops to achieve the mission.

“You just don’t take anything off the table up front, which it appears the administration has tried to do,” retired Gen. James Mattis, who served as head of Central Command from 2010 until his retirement in 2013, told the House Intelligence Committee on Thursday.

“Specifically, if this threat to our nation is determined to be as significant as I believe it is, we may not wish to reassure our enemies in advance that they will not see American ‘boots on the ground,’” he added. “If a brigade of our paratroopers or a battalion landing team of our Marines would strengthen our allies at a key juncture and create havoc/humiliation for our adversaries, then we should do what is necessary with our forces that exist for that very purpose.”