The wife of Israel’s Interior Minister Silvan Shalom is in hot water after posting the following tweet: 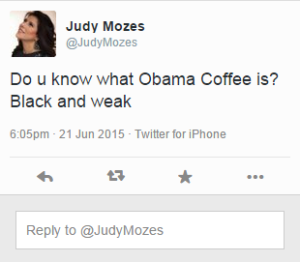 Liberal crybabies are steaming over this comment, not because Judy Nir Mozes Shalom called Obama “weak,” but because she called him “black!” It is clear that liberals have given up challenging the “weak” assertion.

I would like to correct Ms. Shalom on one point – she is absolutely correct that Barrack Hussein is weak. Yep. 100%. However, he is only 50% black. I’m not trying to be all technical. Just sayin’.

After deleting the tweet, Mozes posted a follow-up apology tweet, addressed to Obama: “I apologise, that was a stupid joke somebody told me.”

The most amazing part of the liberal response to Ms. Shalom’s attempt at humor (or maybe it isn’t amazing at all) is their tacit assent to the charge that our president is weak. Gotta’ give them credit for their clarity of vision on that point. But, to slam her for calling Barrack Hussein “black?” Really? HE IS BLACK!

Judy Nir Mozes Shalom is also a local media personality, in addition to being married to Israel’s Interior Minister, whose duty it is to manage strategic dialogue with the US. Thus, the controversy.