The US is considering a preemptive strike against North Korea. This is how such a strike would go down

One of the last remaining testaments to the abject failure of communism is North Korea, often referred to as the Hermit Kingdom, such a beautiful and prosperous place that it has to fence its starving citizens in to prevent them from leaving.

The dangerous combination of an impoverished, starving populace with an insanely deluded totalitarian dictator with nuclear weapons is frightening, to say the least. If ever there was a need for a preemptive strike, North Korea and its psychotic madman are it.

Most recently Kim Jong Un, dear leader of the Hermit Kingdom, claimed that the purpose of his most recent ballistic missile tests was to strike US military bases in Japan. Dangerous rhetoric!

Barack Hussein left President Trump a very tough decision, to preemptively strike or not strike the rogue nation whose batty leader has threatened its neighbors and the United States on many occasions. Do we simply continue to allow the Korean Kook to produce more and more nuclear weapons?

It is almost as if Barack Hussein was intent upon leaving his successor the most dangerous and anti-American world possible. Nah, he would never do that, right?

Should President Trump decide to strike North Korea, he will certainly need the support of China and Russia, both of whom should be all-in on deposing Kim Jong Un and destroying North Korea’s nuclear arsenal, which is as much a threat to them as to the Hermit Kingdom’s other neighbors, especially South Korea and Japan, two other important members of the coalition to deal with Kim.

What to do with North Korea once its people are liberated? I would favor reuniting North and South Korea again, a la the reunion of East and West Germany. Having deployed to South Korea three times as a member of the 25th Infantry Division in the 1980s, I found the South Korean people warm and friendly. I am certain the North Korean people are as well and will greatly appreciate liberation from the many years of misery they have known since the 1950s.

Massive and surgical are the two terms I would use to describe a likely strike against North Korea. Business Insider sees such a strike much the same as I do in their article on the subject, below. 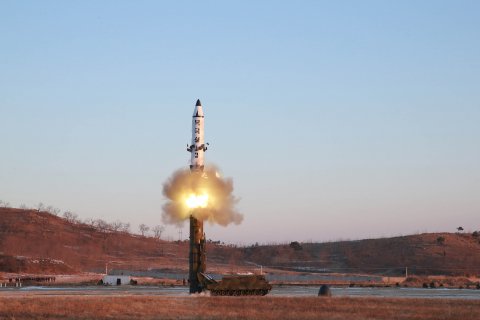 A view of the test-fire of Pukguksong-2 guided by North Korean leader Kim Jong Un on the spot, in this undated photo released by North Korea’s Korean Central News Agency (KCNA) in Pyongyang February 13, 2017.KCNA/Handout via Reuters

Just after North Korea carried out a missile test and a high-profile assassination of Kim Jong Un’s half-brother in Malyasia, the Wall Street Journal reported that the US was considering direct military action against the Kim regime.

US President Donald Trump has apparently honed in on North Korea as his most serious external challenge, and has reportedly declared them the single greatest threat to the United States. In January, Trump tweeted that North Korean missile hitting the US, as they’ve often threatened, “won’t happen!”

But in reality, taking out North Korea’s nuclear capabilities, or decapitating the Kim regime, would pose serious risks to even the US military’s best platforms.

Business Insider spoke with Stratfor‘s Sim Tack, a senior analyst and an expert on North Korea, to determine exactly how the US could potentially carry out a crippling strike against the Hermit Kingdom.

First, a decision would need to be made. Military action against North Korea wouldn’t be pretty. Some number of civilians in South Korea, possibly Japan, and US forces stationed in the Pacific would be likely to die in the undertaking no matter how smoothly things went.

In short, it’s not a decision any US commander-in-chief would make lightly.

Since a full-scale attack could lead to “mission creep that could pull the US into a longterm conflict in East Asia,” according to Tack, we’ll focus on a quick, surgical strike that would wipe out the bulk of North Korea’s nuclear forces.

The best tools the US could use against North Korea would be stealth aircraft like the F-22 and B-2 bomber, according to Tack.

The US would slowly but surely position submarines, Navy ships, and stealth aircraft at bases near North Korea in ways that avoid provoking the Hermit Kingdom’s suspicions.

Then, when the time was right, bombers would rip across the sky and ships would let loose with an awesome volley of firepower. The US already has considerable combat capability amassed in the region.

“Suddenly you’d read on the news that the US has conducted these airstrikes,” said Tack.

While the F-22 and F-35 would certainly do work over North Korea missile production sites, it really a job for the B-2.

As a long-range stealth bomber with a huge ordnance capacity, the B-2 could drop massive, 30,000 pound bombs on deep underground bunkers in North Korea — and they could do it from as far away as Guam or the continental United States. The initial targets would include nuclear reactors, missile production facilities, and launching pads for ICBMs, according to Tack.

Cruise missiles would pour in from the sea, F-22s would beat down North Korea’s rudimentary air defenses, and B-2s would pound every known missile site into dust.

Planes like the F-35 and F-22 would frantically hunt down mobile missile launchers, which can hide all over North Korea’s mountainous terrain. In the event that North Korea does get off a missile, the US and South Korea have layered missile defenses that would attempt to shoot it out of the sky.

Next, the US would try to limit North Korean retaliation. Once the US has committed the initial strike against North Korea, how does Kim Jong-un respond?

Even with its nuclear facilities in ashes and the majority of their command and control destroyed “North Korea has a lot of options,” said Tack. “They have their massive, massive conventional artillery options that can start firing at South Korea in a split second.”

But as the graphic below shows, most North Korean artillery can’t reach Seoul, South Korea’s capital.

Additionally, Seoul has significant underground bunkers and infrastructure to quickly protect its citizens, though some measure of damage to the city would be unavoidable. According to Tack, much of this artillery would instead fire on the demilitarized zone between the two Koreas, detonating mines so that North Korean ground forces can push through. Also within range would be US forces near the DMZ.

Some 25,000 American soldiers are stationed in South Korea, all of whom would face grave danger from North Korea’s vast artillery installations.

But the North Korean artillery isn’t top of the line. They could focus on slamming US forces, or they could focus on hitting Seoul. Splitting fire between the two targets would limit the impact of their longer-range systems.

Additionally, as the artillery starts to fire, it becomes and exposed sitting duck for US jets overhead.

The next phase of the battle would be underwater. North Korea has a submarine that can launch nuclear ballistic missiles, which would represent a big risk to US forces as it can sail outside of the range of established missile defenses.

Fortunately, the best submarine hunters in the world sail with the US Navy.

Helicopters would drop special listening buoys, destroyers would use their advanced radars, and US subs would listen for anything unusual in the deep. North Korea’s antique submarine would hardly be a match for the combined efforts of the US, South Korea, and Japan.

While the submarine would greatly complicate the operation, it would most likely find itself at the bottom of the ocean before it could do any meaningful damage.

What happens if Kim Jong Un is killed? “Decapitation” or the removal of the Kim regime would be a huge blow to the fiercely autocratic Hermit Kingdom.

Kim Jong-un has reportedly engaged in a vicious campaign to execute senior officials with packs of dogs, mortar fire, and anti-aircraft guns for a simple reason — they have ties to China, according to Tack.

Jong-un’s removal of anyone senior with ties to China means that he has consolidated power within his country to a degree that makes him necessary to the country’s functioning.

Without a leader, North Korean forces would face a severe blow to their morale as well as their command structure, but it wouldn’t end the fight.

“Technically North Korea is under the rule of their ‘forever leader’ Kim Il Sung,” said Tack, adding that “a decapitation strike wouldn’t guarantee that the structures below him wouldn’t fall apart, but it would be a damn tricky problem for those that remain after him.”

Unfortunately, North Koreans aren’t shy about putting their leader first, and at the first indication of an attack, Kim would likely be tucked away in a bunker deep underground while his countrymen bore the brunt of the attack.

Then the US defends. Indeed few would expect North Korea to go quietly after suffering even a crippling attack.

Through massive tunnels bored under the DMZ, North Korea would try to pour ground troops into the South.

“The ground warfare element is a big part of this,” said Tack. “I think that the most likely way that would play out would be the fight in the DMZ area,” where the US would not try to invade North Korea, but rather defend its position in the South.

Though its air force is small and outdated, North Korean jets would need to be addressed and potentially eliminated. US special operations forces, after stealthy jets destroy North Korea’s air defenses, would parachute in and destroy or deactivate mobile launchers and other offensive equipment.

The US faces a big challenge in trying to hunt down some 200 missile launchers throughout North Korea, some of which have treads to enter very difficult terrain where US recon planes would struggle to spot them.

It would be the work of US special forces to establish themselves at key logistical junctures and observe North Koreans’ movements, and then relay that to US air assets.

BLM Activists Threaten To Dox Officers And Kill Their Families — Is THAT A Terrorist Threat?
April 13th, 2021 Clash Daily
Contact us