VIDEO: Director of National Intelligence says the Russians did NOT help Trump win. In other words, CIA, your boss is telling you, “Shut up, liar!”

A total of 29 Democrat electors are now demanding an intelligence briefing before casting their ballots in the Electoral College on December 19.

Do they imagine that they are going to change Republican electors’ minds? I see no way that will happen. Or are they just doing all they can to further delegitimize Trump’s victory.

Whatever their bizarre thinking, they are scum of the earth for plotting to overturn the will of the people.

I believe they recognize that their party (double meaning) is dead if they can’t pull this off. It is the death throes of a dying organization clinging to life.

Furthermore, where is the commandment that says foreigners shall not influence other nations’ elections? Russia DID NOT hack our election or even influence it. That is now the finding of America’s top intelligence agency, to which the CIA is a subordinate agency. In other words, CIA, your boss is telling you, “Shut up, liar!”

Barack Hussein openly interfered with Israel’s election, sending his 2012 campaign team to Israel to run an effort to unseat Benjamin Netanyahu. Where was all the righteous indignation from the left then? FAIL!

And how about Brexit? Hussein not only interfered with that election, he threatened Britain with consequences if they voted to leave the European Union, declaring that if the Brits voted to leave the EU it would have to “go to the back of the queue” to negotiate its own trade deal with the United States. A US-UK trade agreement is not going to happen “any time soon,” threatened Hussein. FAIL!

According to Lou Dobbs, “The CIA’s claim that Russian cyber-attacks were aimed at handing Donald J. Trump a victory now rejected by the nation’s top intelligence office,” the office of the Director of National Intelligence, which oversees all seventeen US intelligence agencies, including the CIA, which has now exposed itself as nothing more than a Democrat tool. 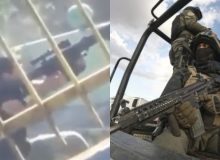