The Trump influence: A year ago 28% of Aussies supported a ban on Muslim immigration. Today, 49%. Aussies are fed up. No more Muslims!

There is a sociopolitical fever spreading across the civilized portion of the globe, a growing hunger for populism and nationalism, taking care of the folks at home first.

Call it the Trump influence.

Even though the populist movement was alive and well before The Donald came onto the anti-radical Islam scene, where he was preceded by the likes of Britain’s Nigel Farage, Dutch MP Geert Wilders, and Australia’s Senator Pauline Hanson, among others, he is the leader of the movement.

The reason the movement bears Trump’s name is because he is the ONLY American politician who has stepped up, not wimped out, refused to cave to pro-Islam political correctness. He has called a spade a spade, he has been honest, and let’s face it, he is American. Powerful combination!

Where populist politicians in other parts of the world may influence the grass roots in their own respective countries and perhaps a bit beyond, an American politician speaks to the world. And speak The Donald does. And the anti-Islam fever is spreading.

A poll conducted a year ago in Australia resulted in only 28% of Aussies in favor of a ban on Muslim immigration. Today that number is 49%. The Trump influence.

While the bleeding heart liberals are wringing their hands over the fate of poor Muslims, most of whom are given refuge in western countries only to become welfare parasites…. and that is the good news, as many of the parasites also become mass murderers, Trump and the Populists (great name for a band….remember you heard it hear first) are busy engineering ways to keep the parasites out…. COMPLETELY!

If you want no more radical Islamic terror, banning Muslims from entering your country is Step 1 in accomplishing that goal. 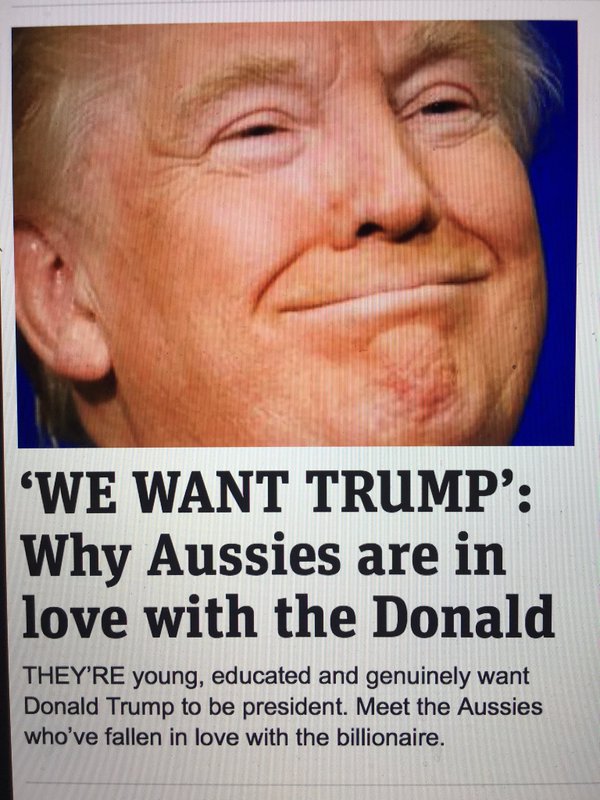 Now, this is rich! A Muslim lady, believing that liberal cockroaches would come out of the woodwork to support her pro-Muslim immigration position, posted a poll to Twitter asking respondents if they would “support or oppose a ban on Muslim immigration to Australia.”

Boy, did this blow up in her face (pun intended). I just responded to the poll and the split was 69% opposed to Muslim immigration and 31% in favor. Oops!

Stuff this. I'm doing my own poll.

"Would you support or oppose a ban on Muslim immigration to Australia?"