These boots were made for genocide. Nancy Sinatra says all five million “murderous members” of the NRA “should face a firing squad”

Photo, above: Nancy Sinatra, looking like death warmed over herself these days, believes all NRA members should be executed

How stupid would it be to tell five million murderous people who have lots of guns and ammunition that you believe they should be executed? VERY stupid!

That is exactly what Nancy Sinatra has done.

But, Nancy knows and we all know she has nothing to worry about, as all five million NRA members are not murderous, but rather rational, law-abiding citizens, which proves again that Nancy Sinatra and the entire brainless bunch of leftists in Hollywood are off their collective rocker.

Sinatra sent out an absolutely vile tweet today, that suggested 5 million NRA members should be killed by a firing squad. The tweet didn’t mention the Las Vegas massacre, but the timing of her tweet seems to be in line with the 100’s of celebrities who are using this horrific massacre as an opportunity to push gun-control in America, reports 100 Percent Fed Up. Here is a screenshot of the tweet she sent out on Twitter today. Sinatra has since removed her disgusting tweet, but the screenshot of her horrific suggestion is here to stay. 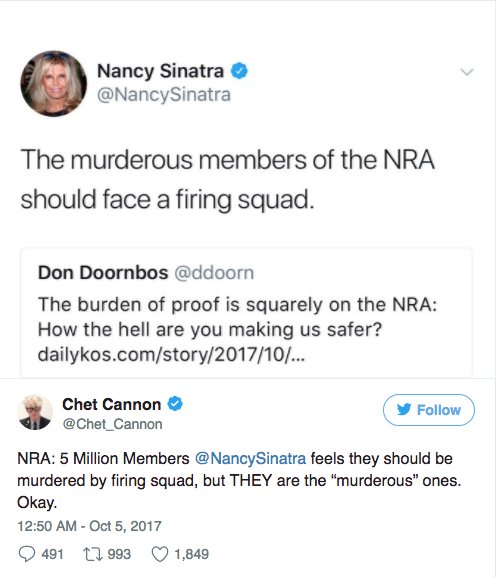 Another day, another liberal entertainer wishing harm, or in the case of Nancy Sinatra, death on millions of Americans. When do American citizens, who are sick and tired of being abused, berated, and slapped around by celebrities who have no respect our God-given rights, stop supporting their industry? When will we cut the cord, and turn off the NFL, and turn off shows like “Will and Grace” who admittedly are making a return to TV so they can promote an anti-Trump message to their viewers? When will Americans find something better to do with their time than watching a TV show or movie featuring an actor or actress who boldly stands against our First and Second Amendment Rights, and regularly spews hate against our President because he bravely defends those inalienable rights?

If you want to see a man who faces a “firing squad” each and every day, while celebrities sit comfortably in their Malibu mansions, acting as keyboard warriors for the left, attacking him and anyone who supports him,  you don’t have to look too far: 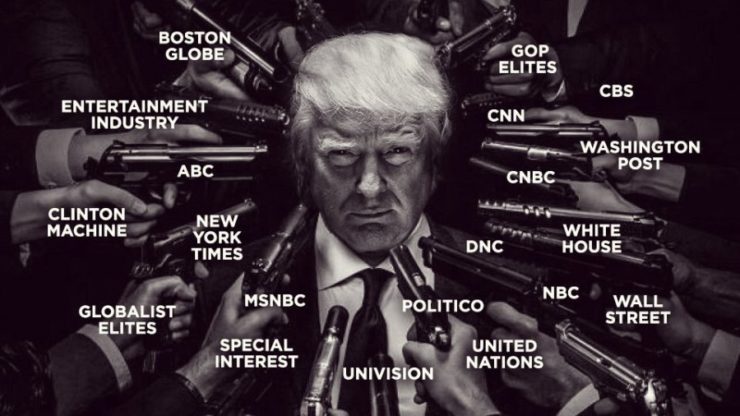 Any politician who takes money from the NRA has blood on their hands.

Our friend, Marie Tweets had a brilliant response to Sheryl Crow’s tweet:

Any politician who funds abortion clinics has Blood on their hands.

You are a sick and vile human being. While America mourns the lives of 58 innocent people who could've just as easily been killed by a bomb, you call for the death of 5 million Americans by gunfire? You should be ashamed of yourself! Nice legacy…