What?! Las Vegas police are conducting a manhunt for a man who placed raw bacon on the doorknob of a mosque. What’s the charge?

You can get away with anything in Vegas. Illicit sex, gambling, prostitution, you name it! But the one horrific crime that will get the authorities riled up enough to conduct an exhaustive manhunt for the perpetrator is bacon being placed on the doorknob of a mosque.

What is clearly just a prank is elevated to a high crime these days in Vegas, and in fact, the entire politically correct United States.

So, what if you threw a couple of fat ribeyes on the doorstep of a Catholic church. Think there would be a protest by the parishioners and an in-depth investigation and manhunt by the police? Nope, probably a barbecue is the most that will come of it.

But that’s because you can do anything you want to Christians in America. Just don’t offend Muslims. In fact, you can place a crucifix in a jar of urine and call it art. No problem. You can smear animal dung all over a likeness of the Virgin Mary and no one bats an eye. Just tiptoe when you see a Muslim. Look down at the ground. Don’t dare attempt to make eye contact with a goat humper. It is forbidden for infidels.

Likewise, Jews are treated horribly, all over the world. America is no exception.

So, what is the charge for placing raw bacon on the doorknob of a mosque? Improper food handling? Cruelty to animals? Littering? Indecent meat exposure? Just what the hell charge could there be for such a prank? 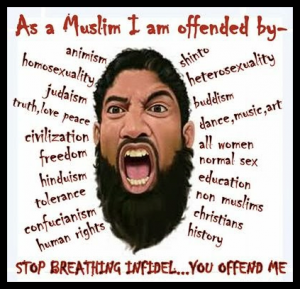 Las Vegas, America’s den of iniquity, gambling, prostitution — you name the vice, you can buy twice. So I am bemused, though not amused, that bacon left on the door handle of a mosque has the Las Vegas Police department on a jihad to find the perps. The bacon is being investigated as a “hate crime.” Seriously. Bacon on a door handle is a crime now? Maybe in Muslim countries, but when did America decide that we would be a sharia nation as well?

Sharia in Vegas. That’s what this is. In the UK, an 18-year-old girl was jailed for this very thing. This is America, not Yemen or the UK, but not for long. And while what these pranksters did was silly, jail time? For a bad joke? Defacto Islamic law (sharia) in Las Vegas, of all places.

This isn’t a hate crime. This is Islamic law. Look at FBI  “hate crime” statistics. Attacks on synagogues are at record levels. Unprecedented. Mosques stats — not even close. No one gives a fig about the synagogues. That tells you all you need to know.

Islamization of America is out of control.

Police are seeking to identify a man who placed raw bacon on the door handles of a Las Vegas mosque, an apparent hate crime that was recorded by surveillance cameras.

According to cops, the defacement of the Masjid Tawheed mosque occurred around 3:15 AM Sunday. Video captured a man first placing bacon on the handle of the mosque’s rear door. The vandal then walked to the mosque’s main entrance and stringed several pieces of bacon across the front door handles (as seen in the adjacent photo).

The bacon was discovered hours later by worshipers arriving at the mosque for early morning prayers. Muslims are prohibited from touching or consuming bacon and other pork products.

Based on surveillance video, the suspect, who wore a baseball cap and glasses, appears to be a white male with a mustache, goatee, and long sideburns. It is unclear how he arrived at the mosque in Spring Valley, a town two miles from the Las Vegas Strip.

In April, an Oklahoma mosque reported to cops that “someone put uncooked bacon on the door handles of the men’s and women’s mosques” on a Sunday morning. No arrests have been made in connection with the incident at the Islamic Society of Edmond.