While police scour a forest the Dung brothers are said to be trapped in, it was just announced that Charlie Hebdo will not skip a beat and will make its next publication date. The only difference is that instead of the 150,000 copies of the magazine that are normally published, 1,000,000 copies of this latest edition will be published. Take that, Mohammed!

Two armed suspects wanted over the Charlie Hebdo massacre were tonight being pursued through woodland as a huge manhunt closed in on a forest.

Police believe they have tracked down the brothers to a remote area about 50 miles north-east of Paris after reportedly robbing a nearby petrol station.

Officers are said to have found a Molotov cocktail bomb and jihadist flag in the car of Cherif and Said Kouachi, which they abandoned before fleeing.

The men, still armed, headed on foot into the vast Forêt de Retz (Retz Forest) that measures 32,000 acres, an area roughly the size of Paris.

Special police combing the French countryside were tonight searching a huge cave hundreds of feet deep for any sign of the alleged gunmen.

Veronique La Mer, whose house is within 50 yards of the cave, a former quarry, said as she watched anti terror police search: ‘We are afraid.’ 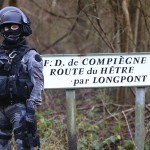