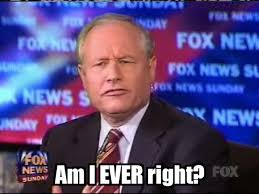 So, Bill Kristol made his big announcement a week ago that he had pretty much chosen the independent candidate who would prevent a Trump presidency and guarantee a Hitlery presidency, an enterprise, if successful, I consider nothing less than treasonous.

Enter virtual nobody David French, an attorney and National Review columnist (disqualification enough), who was hand-picked by Kristol to put Hitlery in the White House.

Kristol, a well-known graduate of the Karl Rove School of Prognostication, like the architect himself, is almost never right about ANYTHING!

Asked why he decided not to run, French declared that he could hardly keep up with Buffy and Jody, adding that Bill Kristol is an imbecile.

National Review columnist David French announced Sunday evening that he would not make an independent bid for president.

Speculation about the possibility of French running began when the editor of the Weekly Standard magazine, Bill Kristol, tapped the conservative writer as someone who could take on Donald Trump, the presumptive Republican nominee and Hillary Clinton, the likely Democratic standard-bearer.

French was seen as a surprising pick due to his lack of public recognition.

French, who is also an Iraq war veteran, shared his decision not to run in an op-ed published on the National Review.

“After days of prayer, reflection, and serious study of the possibilities, I am not going to run as an independent candidate for president of the United States,” French said.

>French states that although he does not see himself as the person to take on the 2016 race, he thinks others could run and win — specifically Mitt Romney.

“Indeed, the path is there,” French wrote. “I learned that the ballot-access challenge can be met with modest effort (by an existing network ready to activate), that the polling for a true outsider independent was better than most people know, and that there are many, many Americans — including outstanding political talents — who are willing to quit their jobs — today — to help provide the American people with an alternative.”

On Monday, he told CNN’s Jake Tapper a successful independent bid needed to come from someone “with an independent constituency,” pointing to a series of high-profile Republicans who strengthened their backing of Trump last week.

“There is a path to defeat Donald Trump and Hillary Clinton,” he told Tapper on “The Lead.” That much was made apparent to me in eight days of extensive study.”