In a bizarre story Powdered Wig published a story on a few days ago, an Australian woman in Minneapolis called 911 to report a sexual assault underway behind her house. For doing the right thing, one of the cops shot and killed her for no apparent reason. Details of the exact circumstances in the incident are forthcoming.

In a press conference to announce the firing of the police chief over the matter, Minneapolis Mayor Betsy Hodges (D) was interrupted by protesters Friday who shouted her down, refusing to let her speak.

As reported by The Hill, protesters shouting for Hodges’ resignation forced the mayor into silence at the press conference, demanding changes to the police department that has “terrorized” the city.

“We ask you for your prompt resignation. We don’t want you as our mayor of Minneapolis anymore,” a man said during her press conference as Hodges looked on.

“We are asking you that you take your staff with you,” he added. “We don’t want you to appoint anybody anymore. Your leadership has been very ineffective, and if you don’t remove yourself, we’re going to put somebody in place to remove you.”

Cameras quickly turned away from the mayor and continued covering the protesters.

“Your police force has terrorized the city enough. Your press conference is ineffective because you won’t let the people in. And you didn’t want to hear us, so you hear me now,” he continued.

“We do not want you as our mayor of Minneapolis, and we’re asking you to resign,” the man added as people began to cheer.

The mayor began to speak but was drowned out by protesters. Cameras remained focused on the protesters as the mayor attempted to regain control of the briefing.

Harteau resigned in a statement Friday, saying that “the recent incidents do not reflect the training and procedures we’ve developed as a department.”

“I’ve decided I am willing to step aside to let a fresh set of leadership eyes see what more can be done for the M.P.D. to be the very best it can be,” Harteau said. “The city of Minneapolis deserves the very best.”

Hodges referenced the chief’s resignation earlier in the press briefing before it was shut down by demonstrators.

“In conversation with the chief today, she and I agreed that she would step aside to make way for new leadership,” Hodges said Friday, according to The New York Times. “I asked Chief Harteau for her resignation, she tendered it, and I have accepted it.”

On Saturday, Justine Damond, a 40-year-old Australian woman living in Minneapolis called 911 to report a possible rape occurring outside of her building in an alley. When officers responded, their body cameras were turned off. When Damond approached the officers’ squad car, one of the officers fired one shot at Damond, fatally wounding her.

The outgoing police chief said in remarks earlier this week that Damond’s death was a mistake.

“Justine didn’t have to die,” Harteau said Thursday. “I believe the actions in question go against who we are as a department, how we train and the expectations we have for our officers.”

Hodges, a member of the Minnesota Democratic–Farmer–Labor Party, is up for reelection in November. Her office did not immediately respond to The Hill’s request for a comment. 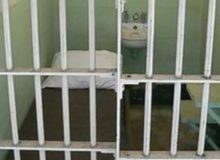 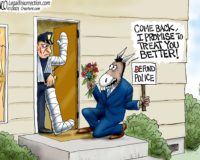