So, now Seth Rogen has a life-long association with Jabba, the Pizza Hut, aka Michael Moore. I wonder how he likes that. LOL! 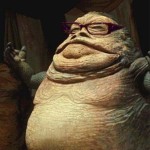 Moore and Rogen had tweeted harsh criticism the movie “American Sniper,” which tells the story of Chris Kyle.

Moore tweeted that he learned snipers are cowards, and Rogen tweeted that the movie reminded him of a Nazi propaganda film. Both have since backed away from those tweets.

The owner of Brann’s then had his sign show a message that he won’t ever serve Moore or Rogen.

“First of all this isn’t about me,” Tommy Brann said. “I mean, it’s about Chris Kyle, an American hero. What he did was so patriotic. He served our country, and he did it well, and to call somebody that died a coward, I couldn’t believe it.”

Brann says he hopes his sign of respect for Kyle extends, as well, to local men and women serving in the military.