Ferguson Police Officer Darren WIlson’s account of the confrontation in which Michael Brown was fatally shot has reportedly been leaked, with an independent medical examiner’s report backing up his version of events.

Brown had marijuana in his system and was shot at close range in the hand, backing up claims by a police officer that that there was a violent struggle between the Ferguson, Mo. teen and the cop, an independentmedical examiner told the St. Louis Post-Dispatch.

The report supports Wilson’s account, given after he shot and killed the 18-year-old on Aug. 9. Witnesses claimed the teen was surrendering when the cop fired. Police maintained Wilson only used his gun after Brown tried to take it – a life-and-death fight inside a police SUV.

A source familiar with Wilson’s version of events, as told to investigators, said the ‘incredibly strong’ teen punched Wilson and then pressed the barrel of the cop’s gun against the officer’s hip and fought for control of the trigger, the Post-Dispatch said.

Once Wilson finally had the gun, he fired. But Brown’s hand blocked the mechanism, according to the St. Louis newspaper.

Wilson eventually got two shots off, striking Brown in the hand. He ran off, then regrouped and charged the officer; setting up the final fatal confrontation, according to Wilson’s leaked statement.

Separately, St. Louis medical examiner Dr. Michael Graham – not part of the official investigation – reviewed the autopsy report on Tuesday and told the Post-Dispatch its finding “does support that there was a significant altercation at the car.”

A forensic pathologist in San Francisco, Dr. Judy Melinek, said the autopsy “supports the fact that this guy is reaching for the gun, if he has gunpowder particulate material in the wound.”

Brown’s blood was found on Wilson’s gun, according to the Post-Dispatch.

Melinek also said Brown was facing the officer, not running away, when he was shot twice in the head, twice more in the chest and once in the upper right arm,according to the Post-Dispatch. 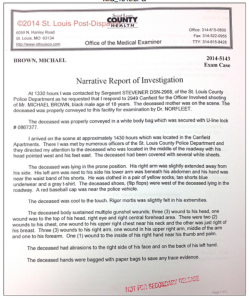 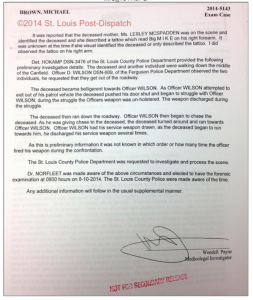 A St. Louis County grand jury will decide if Wilson will be charged in the shooting.

The shooting stirred three months of unrest in the St. Louis area and gave rise to a popular chant among protesters: “Hands up, don’t shoot.”

Turns out, that may not be true at all.

Wilson’s account of the messy shooting was revealed for the first time Tuesday by the Post-Dispatch, which alleges the officer stopped the teen on a Ferguson street after realizing he matched a radio alert of a robbery suspect.

That runs counter to Ferguson Police Chief Thomas Jackson’s assertion in August that the stop had nothing to do with the heist.

Video showed Brown stealing a $48.99 box of cigars from a convenience store in a strong arm robbery.