Just another Democrat politician getting arrested in a meth-for-gay-sex sting. Nothing to see here, folks. Move along. 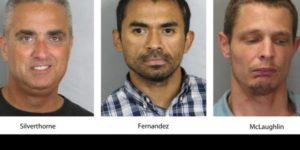 Powdered Wig Quiz of the Day: Of the three news items below, which is the most surprising?

This one was easy. They will get harder as we approach Election Day. The obvious answer is #2. Hitlery’s average number of screaming/cussing fits in a day is 78, during the majority of which she hurls dishes or wine glasses or lamps or small animals. Her record hissy fits in a day is somewhere between 754 and 762. Secret Service agents had a difficult time keeping track.

The temperature reaches over 80 degrees in Arizona EVERY day, even in the winter, so #1 should have been discounted immediately. When it gets down to 90, Arizonans bundle up in parkas and gloves.

Also #3 was an easy extractor to dismiss immediately. Another Democrat politician being arrested in a meth-for-gay-sex sting seems to be a regular occurrence, so it is not at all surprising. In fact a Democrat politician was arrested Thursday for that very thing, offering meth to undercover cops in return for gay sex. Oops!

R Scott Silverthorne is the Democrat mayor of Fairfax, Virginia. At least he was. He is now awaiting trial for a meth-for-gay-sex bust.

Just another (yawn) scandal of gross depravity involving a Democrat politician. No surprise.

According to Los Angeles Times, “After receiving a tip about a possible methamphetamine distributor in July, Fairfax County police said in a statement that they began an inquiry and identified a suspect distributing methamphetamine through a website used to arrange for casual sexual encounters between men.

Police said an undercover detective created a profile on the site and that within days the suspect, who turned out to be Silverthorne, made contact and they then communicated by text.

Detectives met Silverthorne at the Crowne Plaza Hotel in McLean on Thursday and he was arrested after he gave them methamphetamine, police said.