Shown in this pic with another complete dumbass, Memphis mayor wants to dig up the bodies of Confederate general and his wife and move them

Photo above: Memphis Mayor AC Wharton, with another shining example of the Democrat party

Memphis mayor AC Wharton is proposing digging up the bodies of Confederate general Nathan Bedford Forrest and his wife, and moving them from a city park that was originally named for Forrest, but has since been renamed by the  authorities in Memphis.

The first question I have for the mayor regarding his obvious hatred for Forrest is does he realize that Forrest was a leader in the mayor’s own Democrat party? Nathan Bedford Forrest was a committed Democrat who fought the anti-slavery Republicans his entire life. So, why, Mayor Wharton, are you a Democrat, a member of the same party as a man whose memory is so repugnant to you that you want to dig him up and move him? 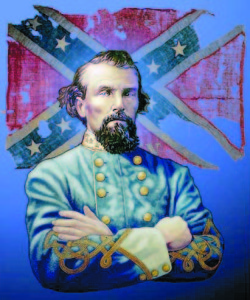 Memphis Mayor A C Wharton says he thinks a statue of Confederate Lieutenant General Nathan Bedford Forrest should be removed from a city park.

Mayor Wharton joins a growing number of voices calling for the complete removal of all traces of Forrest from the park.

In an emailed statement to The Associated Press late Wednesday, Wharton said he would like to see the statue removed from Health Sciences Park and “returned to Forrest Monument Association that had it placed there.”

Wharton said the graves of Forrest and his wife, which are in the park, should be relocated to Elmwood Cemetery.  Elmwood was the original location of the graves, until 1904, when the park was created and the statue erected.

Wednesday, City Council member Myron Lowery told us, “This is a time gone by; a time passed. A time that, yes, is historical in our city but it’s not a time to be honored.”

Lee Millar with the Sons of Confederate Veterans strongly opposes the move, “He was a city councilman, an alderman for two terms, and helped rebuild the city after the war.”

Before the war, Forrest was a millionaire from his business as a slave trader, cotton merchant, and real estate investor.

Millar also claimed there’s no direct evidence Forrest was a member of the KKK, although many non-partisan historical resources, like The Civil War Trust, say he was definitely a Klan leader who advocated violence against former slaves.

Health Sciences Park was called Forrest Park until the City Council voted in February 2013 to change the name.

It also changed the names of Confederate Park and Jefferson Davis Park.

It was not immediately clear whether the City Council will consider moving the statue.