I cannot count the times I have heard someone refer to the chinless wonder, Mitch McConnell, as a turtle. I have done this myself…. many times! He looks like a turtle. Why is it so off limits to compare Michelle Obama to a Gorilla? I had a friend in high school who bore an amazing resemblance to a turkey. Guess what his nickname was all through high school? Turkey! A lot of us look like some sort of animal. I look like an eagle, with my rather prominent hooked beak. BFD! 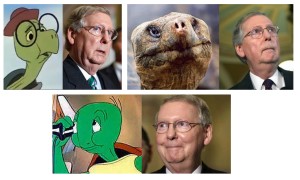 A Washington mayor has found himself in hot water for his remarks comparing our First Lady to a gorilla. While I see a faint resemblance, I believe a lesser developed species of primate is more accurate.

Nonetheless, Airway Heights mayor Patrick Rushing has been asked to resign over his facebook comments, even though he has apologized and begged forgiveness.

No such luck in Liberalville, Patrick. You live in uber-progressive Washington state. Only the most painful penalty will do for you. Smart politicians with an eye to the future understand that safety and upward mobility lie in only insulting conservatives. You could find yourself in the Governor’s Mansion in no time if you can perfect this practice.

The Powdered Wig Research Team was only able to find one gorilla who agreed to comment on the comparison to Michelle Obama. 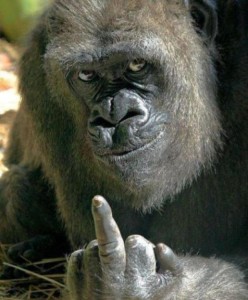 From The Washington Star-News

A Washington state mayor has refused to resign after coming under fire for calling first lady Michelle Obama “Gorilla face” on Facebook. The Airway Heights City Council asked Mayor Patrick Rushing to step down following the incident, though Rushing said he would not.

“I made a mistake. I owned up to my mistake,” Rushing said. “If I do resign that’s admitting I’m a racist and I’m not,” the Spokesman-Review reported Tuesday. “I will not step down. But I will do everything I can to turn the tide around,” the mayor said, as reported by KHQ-TV, an NBC affiliate in Spokane, Washington.

Deputy Mayor Kevin Richey first became aware of the comments July 10 and reported them to City Manager Albert Tripp, the Spokesman-Review reported. The full comment from Rushing’s Facebook post was reported by KHQ as saying: “Gorilla face Michelle, can’t disagree with that. The woman is not attractive except to monkey man Barack. Check out them ears. LOL.”

Many members of the Airway Heights community were outraged by the comments, calling them racist for referring to the president and first lady as sub-humans.

“It’s just playful back and forth banter that my friends and I do,” said Rushing when he was asked to respond to the comments.

Deputy City Manager and Police Chief Lee Bennett said he was very disappointed by Rushing’s remarks. In response to the mayor’s claim that he wasn’t being racist, Bennett said: “I can tell you that in the matter of public opinion they were racist (comments). When you become a public figure I’m no longer Lee Bennett, citizen. I’m Police Chief Bennett,” the Spokesman-Review reported.