Remember Marilyn Mosby, the Baltimore prosecutor who thoughtlessly charged Baltimore cops with murder? She is in a heap of legal trouble over it

Remember Marilyn Mosby? She is the Baltimore prosecutor who callously announced the many serious charges, including murder, she was filing against the Baltimore police officers who arrested Freddie Gray for carrying a switchblade in April, 2015. Gray died in the back of a Baltimore police van. His death sparked rioting, looting, burning of buildings and police cars throughout western Baltimore. 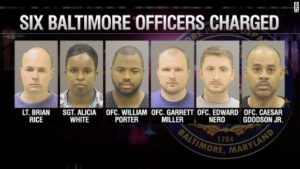 Mosby thoughtlessly charged six cops, pictured above, with a variety of charges, including murder, cold-heartedly announcing to the criminal rioters, “I heard your calls for, ‘no justice, no peace.’ Your peace is sincerely needed as I work to deliver justice on behalf of this young man.” 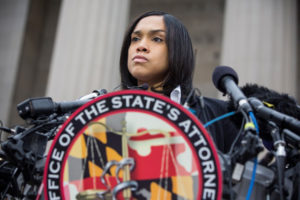 Mosby is now facing a legal battle of her own, as many charges are being brought against her by the cops she wrongly and recklessly sacrificed to appease a mob of criminal thugs. The charges include defamation and invasion of privacy. Attorneys for the officers are now adding malicious prosecution, false arrest, and false imprisonment to the charges against Mosby.

Baltimore State’s Attorney Marilyn Mosby will face a slew of new counts, including malicious prosecution and false arrest in a lawsuit brought by two Baltimore cops, The Daily Caller News Foundation has learned.

Sgt. Alicia White and Officer William Porter, two officers charged in the death of Freddie Gray, filed suit May 2 against Mosby and Maj. Sam Cogen of the Baltimore Sheriff’s office for defamation and invasion of privacy. The suit alleges Mosby and Cogen knew the charges were trumped up, but filed them anyway to quell the riots that had ravaged the city.

Michael Glass, the lawyer for the officers in the suit, told TheDCNF that he plans to amend the lawsuit to include “likely a count of malicious prosecution, false arrest, false imprisonment, violation of the Maryland declaration of rights, article 24 and 26.” He said the they’re currently working on modifying the complaint, and the changes will be official in the next few weeks, likely by the end of June.

John Banzhaf, professor of public interest law at George Washington University, told TheDCNF the officers must prove that there was malice, not just neglect, in bringing the charges.

Legal experts have expressed doubt about the defamation and privacy suit as it currently stands. They point out that prosecutors have broad immunity and are difficult to bring charges against. On top of that, the law makes it difficult to sue state employees while they’re acting in their employment, and aside from the difficulties involved in suing a prosecutor, defamation cases are often difficult to win.

“The bottom line is that there are a lot of obstacles for the plaintiffs to overcome,” Don Gifford, a University of Maryland Francis King Carey School of Law professor, told TheDCNF. “They must win a lot of legal issues in order to prevail in their litigation, but it’s not a firmless case. It‘s a tough piece of litigation, but it’s not a firmless case.”

Porter and White both face charges of manslaughter, assault, reckless endangerment and misconduct in office. Porter has been tried once, but the case ended in a mistrial. He’ll be tried again later this year. Glass was undecided on how much the new counts would affect the damages. The suit currently seeks $75,000 per each count, two counts of defamation and two counts of invasion of privacy.

“The main basis for damages first of course is the lack of income for the better part of year now,” Glass told TheDCNF, adding that his clients have suffered mental pain and suffering for the past year.

The officers argue that during the press conference announcing the charges, Mosby revealed her false motives. Mosby raised eyebrows by appealing to the angry residents of Baltimore, many who had just protested and rioted in the last few days. “I heard your calls for, ‘No Justice, No peace,’” she said. “Your peace is sincerely needed as I work to deliver justice on behalf of this young man.”

Glass argues that when Mosby used this rhetoric and filed charges to quell the riots, she acted outside of her role as a prosecutor and thus should not be protected by the immunity usually due to the position. He said he believes new facts obtained through the discovery process will reveal damning conversations exposing the motives behind charging the officers.

“We believe there were certain communications among some pretty key players that suggest that these charges were brought not based on the evidence but based on an agenda which was to quell the riots at a time when there was a lot of unrest and it was a pretty volatile situation,” Glass told TheDCNF.

Glass also said the officers may bring a 1983 action, a federal statute that says anybody who operates under the state’s “color of law” to deprive a person of their civil rights can be charged. The 1983 action is often used against police officers who shot suspects under questionable circumstances, but it could be used against a prosecutor. Banzhaf told TheDCNF the additional causes of action may increase the viability of the suit.

“The false imprisonment, malicious prosecution and 1983 are the more typical causes of action that would arise in that situation, and in that sense they may be more likely to be adopted by the judge because they are typical,” he said. “If you bring some kind of novel action, novel theory, sometimes judges don’t quite know what to do so in that sense it may be more likely to succeed.”

Gray died in April of 2015 from a spinal injury after being put in the back of a police van shackled but without a seatbelt. His death sparked riots throughout Baltimore.

Banzhaf told TheDCNF the suit may target both Cogen and Mosby to pressure them to give up information about one another. He said the suit could be to get one defendant to turn on the other.

“If enough pressure is put on [Cogen] he may say ‘can we settle mine and I may tell you some conversations I had with Mosby,’” Banzhaf told TheDCNF. “Provided they have a bona fide claim against him, even if they don’t think its strong or if they don’t think they win it, the motivation may be to get him to turn over evidence.”

Mosby’s office and the sheriff’s office did not respond to request for comment.