Two huge explosions at Ariana Grande concert, Manchester, England. Many dead, many more injured. All the markings of a terrorist attack.

Two huge explosions at a concert in Britain. What are the odds that this will be confirmed as a terrorist attack? 10 to 1?

Explosions at an Ariana Grande concert in Manchester, England caused a “number of confirmed fatalities and others injured,” police said late Monday, via Fox News. 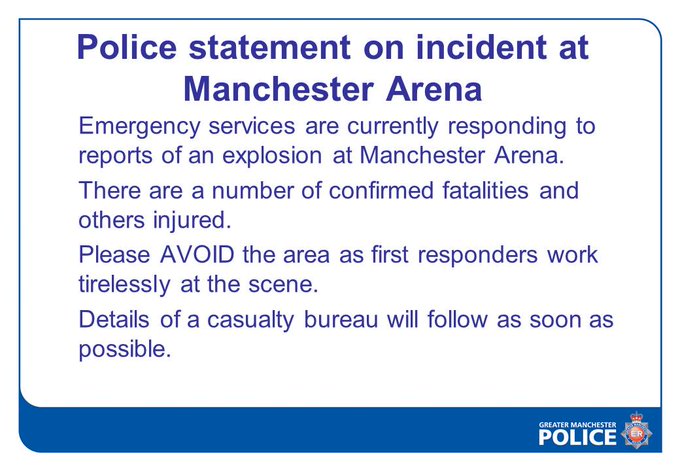 “Two loud bangs” were reported at approximately 10:45 p.m., just after the concert had finished. The cause of the blasts was not immediately confirmed.

A label rep told Variety thatGrande, who was performing at the arena as part of her “Dangerous Woman” world tour, was “okay,” but did not provide further details.

Witnesses described panic as concertgoers rushed to get out of the arena.

Majid Khan, 22, said she heard a “huge bomb-like bang that hugely panicked everyone and we were all trying to flee the arena.”

“Everyone was in a huge state of panic, calling each other as some had gone to the toilet whilst this had gone off, so it was just extremely disturbing for everyone there.”

Another witness, Oliver Jones, 17, told Sky News he was in the bathroom when he heard “a loud bang.”

“The bang echoed around the foyer of the arena and people started to run,” Jones said. “I (saw) people running and screaming towards one direction and then many were turning around to run back the other way. Security was running out as well as the fans and concert goers.”

Manchester Victoria station, which is under the arena, was also evacuated.