Following is the list of 34 senators who pledge to keep the Iran deal alive In congress. Amazingly, 5 of these senators are Jewish!

Following is the list of the 34 U.S. Senators who have pledged to NOT vote to override Barack Hussein’s veto on a Republican plan to kill the Iran Deal. Beyond comprehension is the fact that five of these traitors are Jewish (Boxer, Feinstein, Franken, Sanders, and Schatz). They have virtually signed the death warrant of their fellow Jews in Israel, as well as arming an Islamic terrorist state with the money, weapons, and declared intent to destroy Europe and the United States.

To override Hussein’s veto, the Senate needs a 2/3 majority (67), which they are one vote short of. 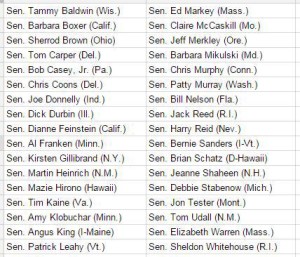