Economics is NOT a zero sum game! Why can’t liberals understand and accept this simple, fundamental, and historical fact?

June 15, 2019. From the archives, originally published July 3, 2015, when Donald Trump was a new and different sort of presidential candidate.

Unlike most of his political, ego-driven opponents, and there were and are plenty from both sides of the aisle, Trump’s only motive in seeking the White House was to serve that country which had done so much for him.

A multi-billionaire and well-known celebrity, Trump had all the fame and fortune anyone could dream of. Yet, he exposed himself to the constant and venomous ridicule and abuse of the Democrat Party, their official communications division, aka the mainstream media, Hollywood, academia, and backstabbing Rinos on Capitol Hill. Only an overwhelming patriotism would lead any citizen to volunteer for such humiliation and torture.

Consider, also, that President Trump is not accepting a salary. He is working for We the People for free, despite having lost an estimated $1 billion of his net worth since inauguration.

I have been singing this tune since the now-famous escalator ride on June 15, 2015…. https://t.co/jAipberW2K

Wealth redistribution. That is the only remedy to poverty that progressive Marxists (liberals) understand. They adhere to the Marxist religion of only a single “zero-sum” pie, which demands that when someone eats a piece of the pie, it means someone else will not have a piece. It has never occurred to liberals that someone could be in the kitchen baking another pie, or that several people could be in the kitchen, combining their efforts toward the task of baking many pies. Or, perhaps, many people in many kitchens could be baking many pies. In fact, we could build a pie factory. Make that many pie factories. Voila! A virtually limitless supply of delicious pies!

This isn’t rocket science. It is called industry, business, innovation, ingenuity, which can all be summed up nicely in that single word that leaves tunnel-visioned liberals sobbing uncontrollably…. CAPITALISM! Economies, like children, grow when properly attended to.

Unable to comprehend, or perhaps ignoring, the lessons of centuries of runaway capitalist success and prosperity, the awesome prospect of unlimited wealth and financial security called the American experiment, liberals continue with the zero-sum game plan – take away John and Mary’s pie so that James and Sally may have it. America’s GDP was not $17 trillion in 1800. It has grown to that point. CAPITALISM!

As though the progressive failures of America’s liberal-run cities such as Detroit and Baltimore were not lesson enough, today’s liberals continue to believe that stealing from the productive to give to the unproductive is the only equitable course of action. How about encouraging the unproductive to become productive, to bake their own pies?

The GDP of Earth has doubled since 1990. This is growth, not redistribution of a single pie, but the baking of many pies by many bakers. This global prosperity is 180 degrees counter to progressive theory. It is right there in front of their faces and they can’t see it!

Now we are watching another related progressive policy phenomenon occur, as liberals stare, like so many deer in the headlights, as America’s productivity continues to shrink. Liberal Rule #743 – destroy incentive to produce, so that we are all equally poor, equally dependent, and equally miserable. Progressive nirvana!

As every government agency, at every level, filled to the bursting point with career parasites, slaps prohibitive regulation upon prohibitive regulation on America’s productive entrepreneurs (employers) and taxes them beyond the incentive-to-produce point, we watch as wiser students of economic history, like the Chinese, eat our economic lunch. The United States has the highest corporate tax rate on the planet. Is it any wonder that our largest and most profitable corporations are moving their operations to tax-friendlier countries, taking their jobs, their money, and their tax revenue with them?

With one hand our liberal policymakers are stealing John and Mary’s pie to give it to James and Sally. With the other hand they are shooing all the bakers out of the kitchen. Only a single candidate in the 2016 presidential field has recognized this destructive course of progressive action and is very vocal about it, and he has a lot of people listening. Donald Trump. 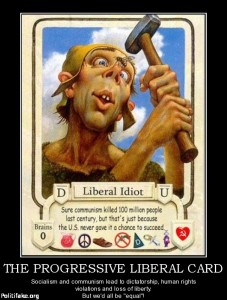 WASHINGTON, July 3, 2015 – “Whoever is rich,” said Saint Jerome “cannot be rich unless he has robbed a poor man.” Saint Jerome didn’t get out much. He was a hermit living in a cave, after all. He believed his severe, self-imposed living conditions prevented him from accidently bettering his lot in life and, by doing so, impoverishing his fellow-man.

Jerome believed in what modern economists call the “fixed cake fallacy.” The silly theory (believed by Karl Marx) states that all wealth is fixed, and, like physical matter, cannot be made or destroyed, only rearranged.

If capitalists were getting rich, it was poor workers who were being robbed.

As time passed and the wages, working conditions and the wellbeing of European workers increased, Marxists had to fashion a plausible explanation for this wealth explosion.

“Well,” they said, “imperialism and the economic exploitation that followed in its wake is the source of that stolen wealth.” For Marxist theory to remain plausible, Western workers and their capitalist employers had to be made coequal plunderers.

The GOP’s ‘sit down and shut up’ candidate: Christie

Wolfgang Fengler, Lead Economist in Trade and Competitiveness for the World Bank, said in a recent blog post,

“I still thought, like most activists on the left did, that the solution to global poverty lay in taking resources away from the rich and redistributing them to the poor… Since 1990, global GDP has more than doubled from $47 trillion to 99 trillion. Most of this growth has happened in countries that were as poor 25 years ago as most of Africa is today… If the world only focused on redistribution, many of these previously poor countries could have never grown rich.”

Unfortunately, many so-called First World nations have geared their economies to wealth redistribution and not growth.

So it comes as no surprise that the journal of Obamanomics, the New York Times, offered its readers this oxymoronic headline:

Five paragraphs into the Times’ story, you’ll find this,

“The share of American adults either working or looking for a job, which in many ways is a better gauge of economic robustness than the oft-cited jobless rate, fell 0.3 percentage point in June. With June’s drop, the so-called labor participation rate is now at its lowest level since 1977.”

It is a supreme irony that a majority of economists say the fixed-cake theory is a fallacy when applied to free markets, but fail to identify economies geared exclusively to wealth redistribution (Greece, Puerto Rico, Washington, D.C.) as the recipients of socialism’s dry, stale crumbs.
Read more at http://www.commdiginews.com/politics-2/obamanomics-amazing-shrinking-socialist-cake-44344/#w03D5o4jeFrosOW7.99