Perfect! Judge presiding over Cohen case was chosen by Bill Clinton as AG and officiated George Soro’s wedding. But nothing to see here, folks. Move along.

The judge chosen to hear Trump attorney Michael Cohen’s case is not exactly a non-partisan actor in this bizarre drama that has already shredded client-lawyer privilege and I believe is a gross violation Mr. Cohen’s Fourth Amendment rights. But, since when did the constitutional rights of others matter to liberals?

Judge Kimba Wood is a flaming liberal, pal to the upper crust of liberal society. She was chosen by Bill Clinton as his Attorney General but withdrew her nomination over a scandal. She is also the judge who officiated the wedding of George Soros.

But, nothing to see here, folks. Move along.

Wood is far too partisan and biased to rule objectively in this case and should recuse herself immediately. If she refuses, she should be forcibly removed from the case and charged with ethics violations!

The federal judge presiding over the Michael Cohen case finds herself at the center of one of the toughest legal brawls of the Trump era — but District Judge Kimba Wood is no stranger to the spotlight, according to Fox News.

She has a colorful and potentially controversial past that could arise as the case involving President Trump’s personal attorney moves forward. Trump allies were quick to note that Wood once was considered for attorney general by then-President Bill Clinton — and she even officiated the wedding of left-wing billionaire George Soros.

“Now she has power over the lawyer who works for the man who beat Bill’s wife in the 2016 election,” he tweeted. “WHERE’S THE THE RECUSAL?”

Judge Kimba Wood is presiding over trial of @realDonaldTrump’s lawyer.

She was picked by Bill Clinton to be Attorney General.

Now she has power over the lawyer who works for the man who beat Bill’s wife in the 2016 election.

With such close ties to the Clintons and George Soros, Kimba Wood is so clearly partisan and biased that there is no way in hell fair treatment can be guaranteed to Mr. Cohen. Since Wood refuses to recuse herself, she should be disqualified from hearing Cohen's case. 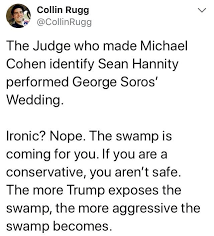 At the same time, the judge has a tough reputation and may end up a fitting addition to a courtroom cast that involves some of New York’s most outspoken figures.

In 2013, Wood presided over the marriage of Soros to his third wife Tamiko Bolton in Bedford, N.Y.

Palm Beach Officials Working on Plan to Extradite Trump to Manhattan
May 14th, 2021 Flag And Cross

A Secular Jew’s And Gentile’s Guide To The Jewish Holiday Of Shavuot And The ‘Ten Commandments’
May 14th, 2021 The Lid
Contact us