I can’t wait to see how the clueless talking heads in the television broadcast sector of the mainstream media spin this. Will George Stephanopoulos wonder, “Yeah, Trump may have brought North Korea to its knees but how will Kim Jong Un react when he sees the first orange hair he has ever seen in person? Will he freak out and push the nuke button? Is that something we should be taking a chance on?”

This is rich. Really, really rich. History is being made and we are all here to watch it happen. After decades of political games and appeasements, an American president has achieved the seemingly impossible, reunification of the Korean peninsula.

Kim Jong Un understands that the fix is in. He either joins the civilized world or his life and the lives of his people are to become even worse.

Just short of a naval blockade, President Trump’s drastic sanctions have caused Kim’s cash reserve to begin drying up and he is ready to talk about an end to the Hermit Kingdom. Reunification of the Korean peninsula is finally within sight. As President Reagan reunited Europe, so too is President reuniting Asia.

A senior South Korean official, who broke news of the invitation and Mr. Trump’s acceptance in an appearance in front of the White House on Thursday evening, said the meeting could be held by May.

A senior U.S. official said Mr. Trump had agreed to meet with the North Korean in a “couple of months” at a place to be determined. He said the U.S. would continue its campaign meanwhile to maintain maximum economic and political pressure on Pyongyang to give up its nuclear arsenal.

Kim Jong Un talked about denuclearization with the South Korean Representatives, not just a freeze. Also, no missile testing by North Korea during this period of time. Great progress being made but sanctions will remain until an agreement is reached. Meeting being planned!

Trump administration officials had suggested on Wednesday that the U.S. would be prepared to open talks with North Korea if Mr. Kim confirmed that he was prepared to suspend nuclear weapons and missile tests and agreed to discuss eliminating his nation’s nuclear arsenal.

The promise from Mr. Kim to refrain from any testing during talks follows a similar promise that Mr. Kim made to South Korean President Moon Jae-in last week, when a senior high-level delegation from Seoul visited Pyongyang and shared dinner with Mr. Kim.

In a tweet, Mr. Trump said he believed he was seeing “great progress” from North Korea. “Kim Jong Un talked about denuclearization with the South Korean Representatives, not just a freeze. Also, no missile testing by North Korea during this period of time. Great progress being made but sanctions will remain until an agreement is reached. Meeting being planned!” he wrote.

Some American officials are wary that North Korea might demand that the U.S. remove troops from South Korea in return or take other steps that would weaken the U.S. military alliance with Seoul.

Earlier Thursday, Mr. Trump sought to draw attention to Mr. Chung’s coming statement by walking into the White House briefing room and telling reporters that they should expect a major announcement. Still, news of the invitation from Mr. Kim and Mr. Trump’s acceptance of it appeared to catch many U.S. officials off guard. 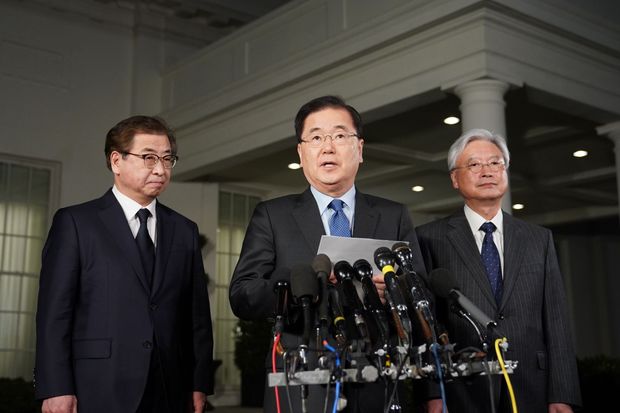 North Korea’s leaders have never met a sitting U.S. president, though Jimmy Carter and Bill Clinton have met with Mr. Kim’s grandfather and father, respectively, after they left the White House.

The move is the latest twist in a long saga of failed diplomacy and threats issues by both sides. During his first year in office, Mr. Trump has swung between angry denunciations of Mr. Kim and suggestions that he was willing to sit down with the North Korean leader. In a September appearance at the U.N., Mr. Trump said the U.S. would “totally destroy North Korea” if attacked and vowed that Mr. Kim wouldn’t survive the devastations. “Rocket man is on a suicide mission for himself,” Mr. Trump said.

In a January news conference at Camp David, Mr. Trump said he was open to speaking to Mr. Kim if he could lead to a peaceful resolution of the American demands that Pyongyang give up its nuclear arsenal. “I always believe in talking,” he said.

The two Koreas, which are set to hold a summit meeting of their own in late April at the Panmunjom truce village on the inter-Korean demilitarized zone, have held two such prior meetings. In both instances, North Korea expressed a willingness to give up its nuclear weapons in exchange for a security guarantee, as they have told the South they are willing to do this time as well.

For Mr. Moon, a left-leaning president who for decades has pushed for more engagement with Pyongyang, the announcement marked the biggest coup yet of his 10-month-long presidency. It came after a year in which South Korea appeared to be left out of a cycle of escalating rhetoric and tension between the U.S. and North Korea—even as Mr. Moon talked about putting South Korea “in the driver’s seat” on security matters on the Korean Peninsula.

Mr. Moon’s outreach to the North went ignored throughout 2017, but when Mr. Kim signaled a willingness to engage during the Olympics, Mr. Moon leapt at the opportunity, proposing inter-Korean talks at the demilitarized zone. At the same time, the Moon administration struggled to convince to the White House, which had been pushing a campaign of “maximum pressure” against Pyongyang, to proceed with the rapprochement.

The senior U.S. official said that the invitation for a face-to-face meeting was conveyed orally from Mr. Kim to the South Korea national security adviser over the course of their meeting in Pyongyang, and that Mr. Trump had spoken with the prime minister of Japan, Shinzo Abe, on Thursday night.

Such a meeting could be justified, the official said, because Mr. Kim was the only person able to make decisions in their “uniquely authoritarian” regime and that Mr. Trump was known as a deal-maker.

“At this point we are not even talking about negotiations,” the official said, but said the ultimate goal was complete denuclearization by North Korea, subject to stringent verification.

“Obviously verification goes hand in hand with any kind of acceptable deal…we will settle for nothing less than that outcome…it’s the outcome that the entire world expects,” the official said.