Looking more like the Kommandant of a Nazi concentration camp these days than a lounge act-turned F-list comic (photo, below), Kathy Griffin is stuck at home, unemployed and no doubt wishing she was back in the saddle, there in Time Square with her old pal/new enemy Anderson Cooper, bringing New Year’s Eve into seventeen living rooms across America, just like the good old days. 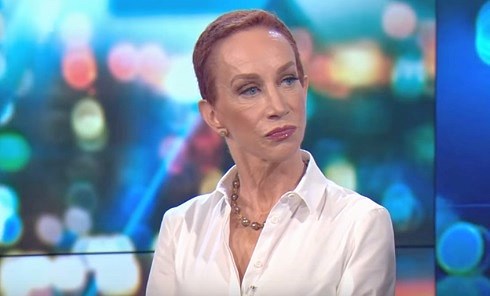 “Why did the chicken cross the road? Because Anderson Cooper kicked it off the New Year’s Eve show.”

“Kennedy: Exactly, you’re dead to me.”

“Hillary couldn’t be here tonight. She already dropped the ball once this year!”

“Hey, you know all of these people can’t go to the bathroom, and thousands of them are wearing diapers, just like Bernie Sanders.”

“Why does the golfer wear two pairs of pants? In case Anderson gets a hole-in-one.”

Hahaaaaaaaaa! Great job, Kennedy. I was laughing so hard, I had to go put on a diaper, "just like Bernie Sanders."