VIDEO: Who knew Karma was a suicide bomber?

Although the poster of this video claims that it is the funeral of a Palestinian suicide bomber killed by the Israeli military, I have vetted it as thoroughly as I can, and I  believe the video is from 2012, and of Syrian origin. In either case it shows the funeral of a suicide bomber who was killed by government forces before he could detonate his bomb. I find it hard to believe that the military turned the body over to civilians before disarming or safely detonating the bomb. Please be advised that the video is somewhat graphic.

If anyone has any more information on this video please leave a comment. Thank you. ~ Thomas Madison 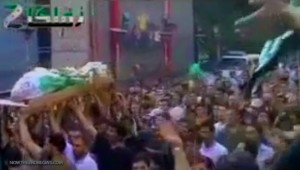 US to Begin Evacuating Family of Embassy Personnel from Ukraine Within Hours
January 24th, 2022 Flag And Cross