Photo, above: Attacked: Deputy Todd Frazier of Long Beach, Mississippi, pulled over last Monday night to check on a car with the driver passed out in the front seat and was suddenly dragged off into the woods to be killed

According to news.com.au, police suspect the attackers were gang members.

A police officer who was dragged into the woods by three attackers was saved thanks to his trusty dog.

Deputy Todd Frazier of Long Beach, Mississippi, a K-9 officer, pulled over last Monday night to check on a car when he noticed that the man in the front seat appeared to be passed out and the lights were off.

That is when two men appeared nearby and distracted him as the driver got out and ambushed him. All three men dragged Frazier into the nearby woods. 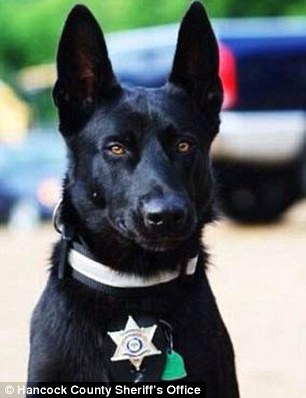 Saved: He was able to unlock the backdoor of his squad car from his keychain and release his K-9 Lucas (above), who bit at least one man and scared them off

‘They told him they were going to slit his throat, and they were dragging him toward the woods,’ Chief Deputy Don Bass said according to The Clarion-Ledger.

He said the men then planned on dumping the body after killing him.

When asked if the incident might have something to do with recent gangs stating they would attack any police officers they encountered on sight, Bass said: ‘At this point in time I don’t care.’

Regardless of their motivation, the men were quickly foiled when Frazier managed to unlock the back doors of his squad car using a pop mechanism that he activated on his key chain.

That sent Lucas, Frazier’s police dog, running after his owner and the men.

The dog bit at least one of the attackers before they ran off, jumping into the Town Car Frazier first stopped to inspect and speeding away from the scene.

Frazier suffered a two-and-a-half-inch cut to his forehead from what a doctor believes was a box cutter and multiple other bodily injuries.

He was taken to a local hospital and released. 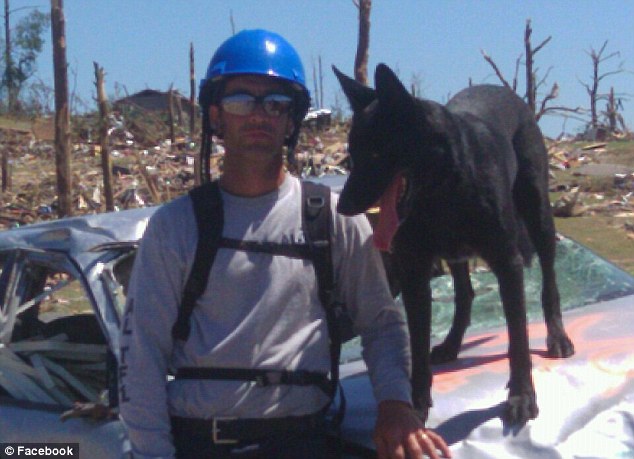 Man’s best friend: Frazier is pictured with his K-9 Lucas in this 2012 snap during a search-and-rescue operation 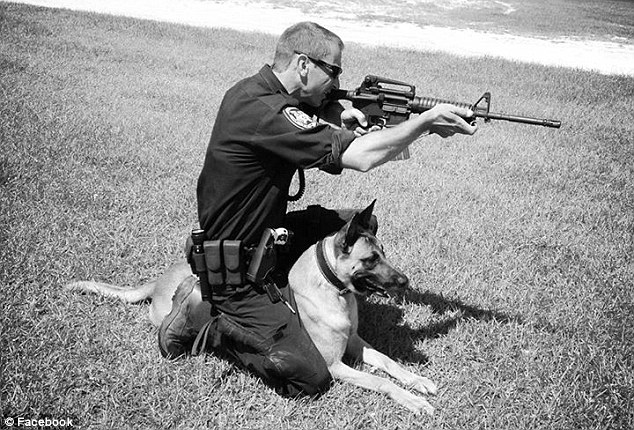 On the mend: Frazier (above with his old K-9 Hank) suffered a two-and-a-half-inch cut to his forehead from what a doctor believes was a box cutter and multiple bodily injuries

Bass later conceded the incident may have to do with gangs in the area.

‘We’ve been stressing this for months and months now. It’s no different from last week. We get a BOLO (be-on-the-lookout) from the state alerting us that the Black Gangster Disciples have put out an SOS, or Shoot on Sight, for police officers,’ he said.

‘For a couple of months we’ve been preaching safety because we knew our location between New Orleans and on the I-10 corridor… it’s going to happen here.’

The three suspects remain at large.

Anyone with information in this case is asked to call the Hancock County Sheriff’s Department at (228) 255-9191.