VIDEO: Joyless Behar squeals with delight when she hears the news that President Trump is in serious trouble. Then, she is embarrassed by the truth!

There may be a more nauseating individual than Joyless Behar on television today, but I can’t think of who that would be. Maybe stunningly beautiful co-host Whoopi Cushion Goldberg.

Watch Bejar and her fellow liberal weenies on the panel applaud and celebrate the fake news that Mike Flynn is going to testify that candidate Trump directed him to contact the Russians. So thrilled is Joyless that you would think she finally found a man who agreed to have sex with her.

“Lock him up!” exclaims Behar to her audience of trained seals who applaud loudly, barking their approval. Oh, happy day!

Then came the embarrassing news (second video, below) that Joyless was nothing more than a purveyor of fake news, so happy to spread Brian Ross’s lie, which Behar claims was a mistake.

I don’t believe it was a mistake at all. I believe it was a lie. The first thing Ross, or any responsible journalist, including yours truly, should have done was vet the story, find corroborating sources, check the timeline. Ross did none of those. He was thrilled to create fake news, thinking he could get away with it, and Joyless and her fellow liberal weenie talking heads throughout the mainstream media were all too happy to parrot the lie and report it as gospel, waiting as long as reasonably defensible to set the record straight, knowing there would be no consequences.

Never does Behar apologize for spreading a lie. Instead, she makes it a punchline…. “On Friday’s show, apparently I was guilty of premature evaluation. I hear they have a pill for that now.” Many yucks.

Meghan McCain does a stand up job defending President Trump while explaining to the panel of obnoxious cowpies how sickening it is to be a conservative and have to participate in their liberal, Trump-hating circus.

Contributing her own bit of ignorance, the black panelist declares that ‘fake news’ “is a term I think that Donald Trump coined, and I think he coined it because it’s so convenient for him.”

Sorry, sweetheart, absolutely incorrect! Barack Hussein coined the term “fake news” as an attack on the right-wing blogosphere, sites like Powdered Wig, which were and are growing, and like it or not, are becoming the go-to source for honest reporting and replacing the dishonest liberal mouthpieces in the Democrat Communications Bureau, a.k.a. the mainstream media, which is dying a slow and just death.

Hussein convinced the powers that be at facebook, Google, Twitter, and YouTube to stop the growth of the right-wing blogosphere, calling us “fake news,” (1:45 mark in the video, below) and since then our reach has dwindled and our ability to market our reporting choked off by the social media giants. Then, and rightly so, the term “fake news” began to stick to the mainstream media where it lives and belongs today.

And, who the hell is the Elmer Fudd-sounding waste product in red in the video, below? I can’t understand what she is saying, although I did make out the word “wesponsibiwity.”

Tweet, below, of Joyless Behar celebrating what she believes is the wonderful news that President Trump is in serious trouble. She has since deleted the tweet, understandably, due to being completely humiliated for spreading a barefaced like. 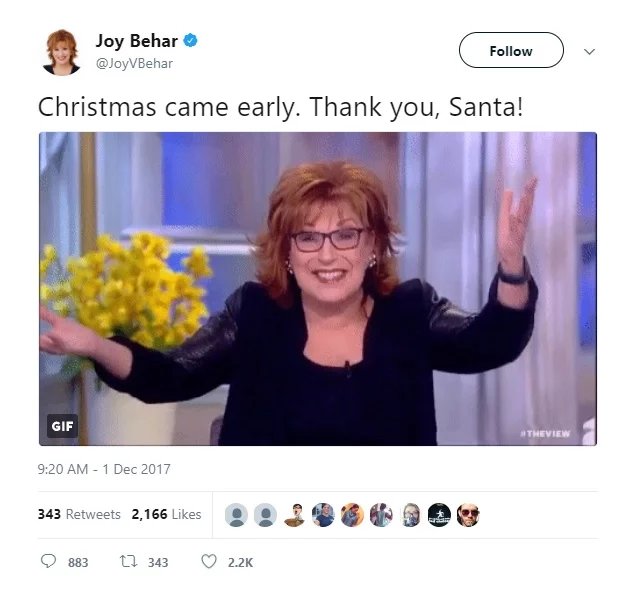 Dear @ABC, You Also Need To Suspend Liberal Blowhard Joy Behar After She Spread #FakeNews About Trump From Your "Journalist" Brian Ross… pic.twitter.com/HBX9mFfwNA

BREAKING TRUMP NEWS: “NEW ELECTION OR PAST ELECTION DECERTIFIED AND TRUMP DECLARED WINNER” THIS IS ABSOLUTELY HUGE!!! EVERYTHING COULD CHANGE!!!
AFF