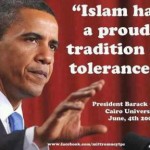 HEY, PRESIDENT OBAMA: I’ve Got to Tell You — Islam Sucks!

by Pete Parker, Clash Daily
I don’t care how many times Barack Hussein Obama (not to mention his mindless hack John Kerry) lectures us on how “beautiful” and “tolerant” the religion of “peace” is–my mindset will forever remain immutable: Islam sucks!

From the time Mohammed raped his child bride Aisha to the myriad beheadings perpetrated by ISIS–Islam has not only been a bane to mankind–but also a festering and oozing boil on its ass since the 7th century.

How can one view the carnage committed by such Islamic organizations as Hamas, Boko Haram, Hezbollah, al Qaeda, ISIS, Islamic Jihad and Jabhat al Nusra and not come to the unequivocal, decisive and logical conclusion that Islam sucks?

(Well, just in case you haven’t arrived at the aforementioned conclusion–get some help.)
In fact, just last week (during an interview for a French TV station) Obama pedantically stated that America has to “educate” itself more about Islam. That comment was yet another odious offering from a man who firmly believes that all grievances emanating from the Islamic global community (Ummah) are fomented by America’s lack of understanding concerning Islamic dogma, doctrine and culture.

Puhleez! One need look no further than Saudi Arabia to understand all things Islamic.
Long considered a mainstream Islamic country–this desert fiefdom’s rule of law is built on the draconian diktats of Sharia. From women being treated as mere fecal matter to Christians being thrown in jail and, or beheaded for proselytizing–Saudi Arabia is Islam in action.

Allow me to digress for a moment in order to issue the following challenge to all parents (with daughters) who believe Obama’s rhetoric about Islam: Go raise your daughters in Saudi Arabia.

Any takers? I didn’t think so.

Anyway–the bottom line is this: Groups like ISIS are not perverting Islam–but merely following it. They not only understand and obey the Koran (Sura 47:4 and 8:12) when it comes to beheading unbelievers–but they also follow the sick and convoluted example set by one of the world’s most infamous pedophiles and warmongers–Mohammed.

So, despite B. Hussein Obama’s incessant declarations that Islam is a great religion of “peace”–my mindset remains hard-and-fast: Islam sucks!