Rumors are flying that Julian Assange is dead. Dead man’s keys have been released to unlock previously encrypted messages in the event of an emergency (Assange’s death)

Julian Assange is nothing less than a hero. He has been risking his life to provide We the People the truth regarding what our miserable excuse for a government is doing behind our backs. God Bless Julian for that.

UPDATE – October 16, 2016, 9:45 PM, CDT: An intelligence officer is reporting that Ecuador has indeed caved to the US and Assange is being extradited, and will likely be imprisoned or dead within the next twelve hours. Click tweet, below, to enlarge…. 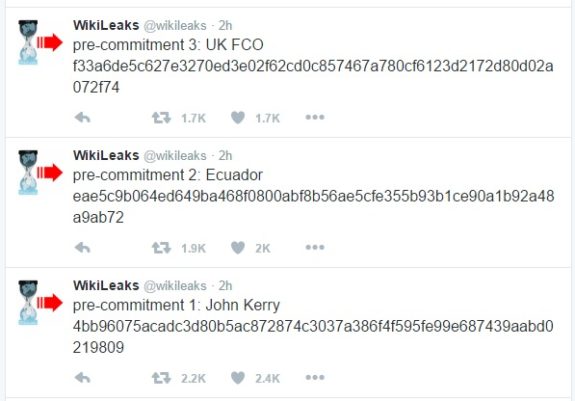 Again, a dead man’s switch is an encrypted key used to unlock a previously encrypted file. Assange and/or WikiLeaks released the following a few hours ago, late Sunday afternoon, October 16, 2016.

According to USA Supreme, “When WikiLeaks released a mysterious file labeled ‘WIKILEAKS INSURANCE’ for people everywhere to download in advance of a huge upcoming announcement,everyone was having a second thought of what this file actually contain. This file serves as a type of “deadman’s switch” that is currently encrypted. WikiLeaks will release a second encryption key to unlock the file if they are prevented from making a planned announcement. Because of previous statements made by WikiLeaks and Julian Assange, many people are wondering if this insurance file is meant to ensure that WikiLeaks can release potentially damaging information about Hillary Clinton. Well, Assange give a response to that question in an interview with John Pilger an Australian journalist based in the United Kingdom and his answer won’t surprise many!

Asked by  John Pilger what is the reason for his leaks that have shaken this world Assange give a swift response!

Pilger: Why do you do this what is the reason for this why do you created Wikileaks?

Assange: It is not about money or fame it is about the truth the people of this world deserve to know the truth

WikiLeaks posts insurance files as a type of ‘deadman’s switch.’ Downloaders get an encryption key, but they need a second one before they can actually unlock the file. The insurance file operates as a type of backup. If anything happens to WikiLeaks, the second key is released, giving everyone access to the file.

In his latest interview with Assange Pilger turn the question about Assange dead man’s switch and what does that encrypted file contain!

Pilger: It is an encrypted file that is  88 GB what does that mean? Does file includes videos and other larger documents and for who are they intended.

Assange: Well it contains everything from videos to e-mails from all over the world!

Pilger: The people in the United States would like to know does this file contain info about Hillary Clinton?

Assange: Well lately I heard a lot of threats from US official and this might be the reason for it,but the answer to your question is yes encrypted file with a dead man’s switch and it is about Hillary Clinton but also it contains info for much more government official around the world!

John Pilger said that he will use information from this interview for his next Wikileaks documentary.”