More than 30,000 illegal immigrants from Middle East terrorist countries have disappeared and are on the loose in the United States

H T Joe LaVeque
During a thirteen year period, 2003 through 2015, 31,725 illegal immigrants from terrorist countries entered the US, received deportation orders and disappeared, many skipping their deportation hearings. These individuals are still on the loose in the US today as far as authorities know.

According to WND, immigration court records are silent.

In fact, some 3,095 of these aliens fled their hearings, among them 338 people from Iran, Sudan, and Syria, nations the State Department declares state sponsors of terrorism.

Mark H. Metcalf, a former judge on the Miami Immigration Court, authored the report that documents how illegal aliens easily cross U.S. borders or enter on forged travel documents and, when ordered to court, ignore their court dates.

Federal law — 18 U.S.C. § 3146 — imposes penalties from one year to 15 years in prison for those who fail to show up for federal court proceedings. Yet those who dodge immigration court are treated much differently. They can literally abandon their cases without fear of incarceration or removal and, in turn, imperil national and domestic security. American immigration courts, in fact, have the highest failure to appear rate of any court-system in the nation.

From 1996 through 2015, just under 1 million people the U.S. alleged were present illegally or had forfeited their right to remain by committing crimes simply missed their court dates and became fugitives, most never to be seen again.

“Over the past 20 years, 37 percent of all aliens free pending their trials — 918,098 out of 2,498,375 — never showed for court,” Metcalf explains. “Courtrooms, like borders, are porous. On average, 46,000 people each year vanished from proceedings created specifically for those claiming persecution in the lands they called home.” 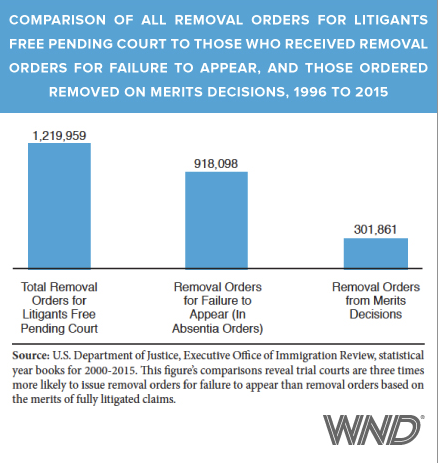 An alarming number of those who evaded court are from countries that sponsor terror. Asylum statistics show that from 2003 through 2015 show 62,409 people came from the 36 nations labeled Specially Designated Countries because they “promote, produce, or protect terrorist organizations or their members.” 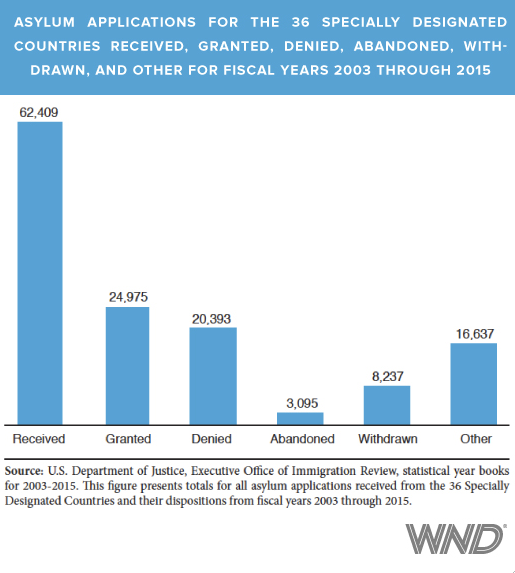 “Of these, 24,975 applications were granted and 20,393 were denied. Another 8,237 applicants withdrew their requests for asylum prior to a trial court issuing a decision on their applications,” Metcalf reports. “A total of 31,725 applicants — 51 percent altogether — were either ordered removed or sought another method to remain in the United States by withdrawing their applications.”

During this 12-year period, 576,893 aliens failed their appearances in immigration courts. Among them numbered 3,095 aliens from the SDCs. 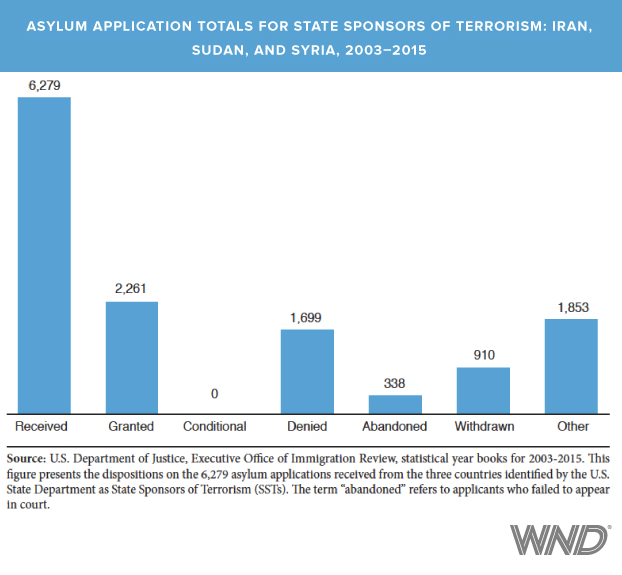 “No accounting from the courts or DHS tells Congress or the public what eventually became of these people once inside American borders,” Metcalf warns. “Though some certainly were in custody and were removed after their applications were denied, others were released and absconded from their asylum hearings, while others disappeared after an order of removal was issued. All that is known is that more half of all applicants did not receive grants of asylum.”

Applicants from countries identified as state sponsors of terrorism — Iran, Sudan, and Syria —comprised a disproportionate share of those who apply for asylum and then disappear from court proceedings. 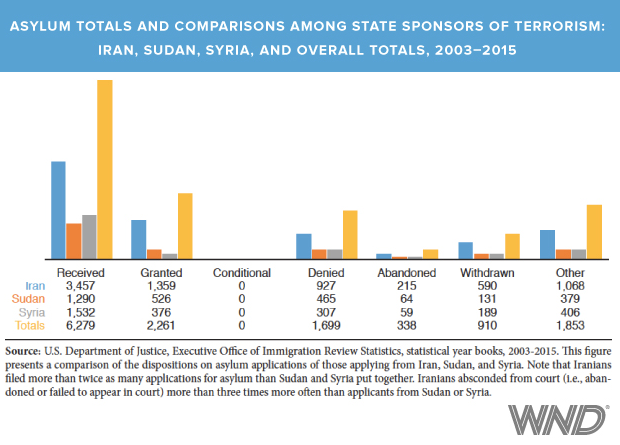 Despite the creation of the Department of Homeland Security and the measures taken to make the nation more secure after 9/11, the federal government continued to handle illegal immigration carelessly. Court evasion increased dramatically after September 11, 2001.

Ambivalent to national security and the safety of the American public, immigration courts misled Congress about the number of illegals who fail to appear in court by gaming the numbers. In some years, failure to appear rates were under-reported by more than 100 percent.

He continues: “Within the raw memory of the fallen World Trade Center towers in New York, 59 percent of aliens free on their own recognizance fled their hearings in 2005 and 2006. Yet the courts stated with the straightest of bureaucratic faces that only 39 percent went missing. Rather than tell Congress that three-fifths of those summoned to immigration courts never showed in these years, the easy way out was the old way out.”

After interviewing judges on immigration courts from across the country Metcalf found that they faced risk of retaliation for exposing the lax implementation of immigration law under former-President Barrack Obama. None Metcalf interviewed were willing for their names to be used.

“Judges on immigration courts across the country … spoke on background only, fearing their statements would prompt retaliation from superiors within the Executive Office for Immigration Review, the agency that manages the courts,” Metcalf writes. “They describe a system plunged into turmoil by appointees at the Department of Justice and Homeland Security who ignored statutes, precedent, and regulation and imposed policies that dramatically increased backlogs and nearly halted adjudication.”

Fourteen years after 9/11, failure to appear rates remain stubbornly high and are on the rise. Since 2012 failure to appear have increased 95 percent. The FTA rate of 43 percent in 2015 is the highest number since 2006, when 59 percent of aliens free pending trial never made it to court.