Can you spot anything wrong in the pic (in the article) of Barack Hussein slamming Trump’s border wall?

“We can’t hide behind a wall!” Barack Hussein declared before a crowd in Berlin on Thursday.

So arrogant is this man that he apparently believes his listeners are stupid enough to completely miss the hypocrisy in his words, spoken from behind a bulletproof “wall” for his the security of his own elite ass.

To hell with the commoners in his audience and the American people. They are not members of the elite class. They deserve no wall for their own security. 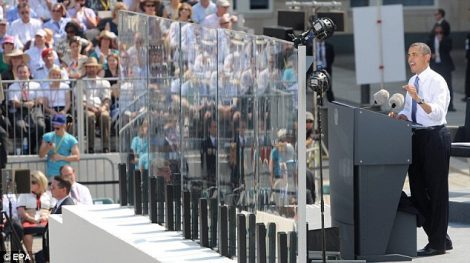 DeSantis Launches Investigation on Facebook Over Election Interference
The Floridian