Guess what this is a photo of. Go ahead, guess. Hint: Can you say “Hypocrat?”

“Hypocrite” and “Democrat” are synonymous. I prefer using the hybrid, “Hypocrat.” Check out the wall the Democrat Party is building around their convention center in Philadelphia.

Reported to be four miles long and eight feet high, the fence/wall is designed to keep out  all those who Hypocrats consider common filth. 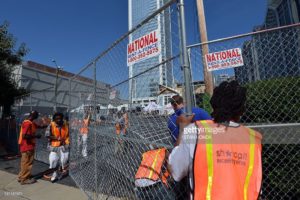 From The American Mirror

To the Democratic National Committee elites, keeping average Americans away from their convention is a good idea, while protecting the southern border from intruding terrorists, rapists and murderers is a bad one.

The DNC has erected a four-mile fence around its convention site at Philadelphia’s Wells Fargo Center. (Isn’t it ironic they’re doing so much to protect a site named after a bank?)

The fence, which appears to be about 8 feet tall, is intended to keep out any individuals with whom Democratic Party leaders, delegates and other liberal elites would rather not mingle.