So, Barack Hussein goes to Dallas to throw gasoline on the fire eulogize the innocent officers massacred during Thursday night’s Black Lives Matter “protest.” Except he doesn’t really do that.

Oh, sure, he spent a few minutes delivering a token, canned eulogy for the victims of Xavier Johnson, who committed mass murder against those sworn to protect us all, and did it in the name of Black Lives Matter, the left’s new favorite terrorist organization, but what he was really there to do was to further the racist agenda of division and class envy.

Blaming the victim is a standard maneuver from the Democrat playbook, and Hussein performed it perfectly…. for the morons stupid enough and/or gullible enough to swallow the horsheshit he is shoveling down their throats. The other 80% of Americans watching saw him for what he is, a cheap fraud.

OBAMA'S DALLAS SPEECH SUMMARIZED: The man who poisoned the wells now shows up pretending to be the water commissioner

From Allen B. West

He spent the first few moments describing each of the victims, providing details about their lives and their families.

And then he pivoted.

Not surprisingly, President Obama used this “bully pulpit” to return to his favorite themes of racism, discrimination and police brutality.

At one point, it really felt as though he was justifying the Dallas attack.

“If we are to honor these five outstanding officers, then we will have to act on the truths that we know… we’re going to have to be honest with each other and ourselves…

We…know that centuries of racial discrimination and slavery and subjugation and Jim Crow, they didn’t simply vanish at the end of lawful segregation. They didn’t just stop when Dr. King made a speech… 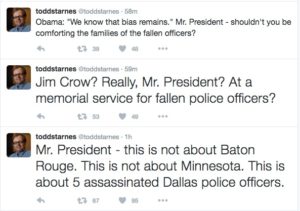 “But America, we know that bias remains. WE know it. Whether you are black or white or… we have all seen this bigotry in our own lives at some point… if we’re honest, perhaps we’ve heard prejudice in our own heads… we know that. And while some suffer far more under racism’s burden, some feel to a far greater extent discrimination…none of us is entirely innocent. No institution is entirely immune. And that includes our police departments. We know this.

“Study after study shows that whites and people of color experience the criminal justice system differently… when moms and dads… still fear that something terrible may happen when their child walks out the door… kids being stupid.. .might end in tragedy… more than 50 years after the passage of the civil rights act, we cannot simply dismiss those engaged in peaceful protests as troublemakers, or paranoid. As a symptom of political correctness, or reverse racism.

So we’re ALL guilty for the deaths of those policemen in Texas. All of us. We might have well as pulled the trigger. Because we’re all racists.

And then – remember he was speaking in Dallas, at a memorial for five slain officers in Dallas — Obama actually eulogized the two men shot last week in Minnesota and Louisiana, Philando Castile and Alton Sterling, saying , “Even those who dislike the phrase Black Lives Matter should be able to relate to stories about Alton Sterling, who always cooked enough for everyone, or Philando Castile, a gentle soul, “Mr. Rogers with dreadlocks.”

Never mind the fact that Sterling was also a registered sex offender with a 20-year rap sheet and Castile may have been a suspect in an armed robbery.

Mr. Rogers with dreadlocks? Please tell me President Obama did not say that.

Many folks seem to feel this was just the finest speech President Obama has ever given. But we’ll just leave you with this commentary from our side of the aisle.