From the desk of LMAO: Border man arrested for the third time for having sex with a horse

Fresh on the heels of American Pharoah’s stunning Triple Crown victory, this shocking (and hilarious) news from Texas. A border man was found in a barn with a broken leg after attempting to have sex with a horse and being kicked. It is uncertain if the kick came from the horse being serviced or a jealous lover.

When I was a youngster I recall my grandfather’s conversations with other farmers during a horse or cattle trade or just discussing livestock in general. The term “stump broke” was sometimes mentioned, always with a smile and a chuckle. I didn’t know exactly what that meant until years later. I reckon it was just a joke that the animal being discussed was trained to back up to a stump for its owner. Right? 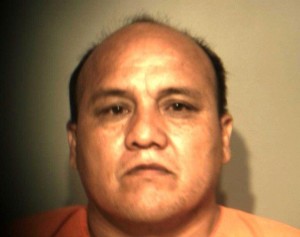 A Texas border man has been arrested for a third time, accused of breaking into a ranch in what appears to be yet another attempt to have sex with a horse. Unlike the two previous incidents, this time the horse kicked the man away, sending him to the emergency room.

Deputies with the Hidalgo County Sheriff’s Office recently arrested 45-year-old Cirilo Castillo on a warrant charging him with trespassing, information provided to Breitbart Texas by the sheriff’s office revealed.

The warrant stemmed from a February 17, 2015 case. Deputies responded to a ranch in rural Edinburg and met with the owner, who claimed she had gone to feed her horses and found Castillo injured inside the barn. Castillo was identified by the owner as a man previously arrested for abusing another horse multiple times in years past; this time he appeared to have a broken leg from a kick by one of the horses.

Because of his injuries, Castillo was rushed to a local hospital. Since the kick earlier this year, investigators gathered evidence and recently charged Castillo with trespassing. A justice of the peace set his bond at $1,000.

In 2013, Hidalgo County Sheriff’s investigators arrested Castillo for the second time after an investigation and surveillance video revealed that he had been breaking into the ranch to have sexual intercourse with one horse in particular. That arrest came soon after he was released from the Hidalgo County Jail for a similar arrest with the same horse.

Information previously shared with Breitbart Texas by former sheriff’s officials familiar with the previous cruelty-to-an-animal cases pointed to Castillo engaging in a series of deviant acts with the a previous horse named India, which included kissing the horse in the mouth, oral sex, and intercourse.