If you are worried about Hitlery beating Donald Trump, fuhget about it! Check this new Fox News poll….

If you have been fretting over the impending Trump/Hitlery election for president, worried that she may win, fear not.

A new Fox News poll shows The Donald whipping the Wicked Witch of Benghazi by three percentage points, 45% to 42% in a national poll, and an even worse 46% to 30% among independents.

Just a month ago a Fox News national poll showed Hitlery beating The Donald head to head, 48% to 41%. And who knows, Monica Lewinsky’s ex-boyfriend’s wife may be indicted before the election. Just the prospect of Hitlery being indicted must make Democrats shake in their vegan hemp sandals. How can Bernie not be a more appealing candidate to the Dems? 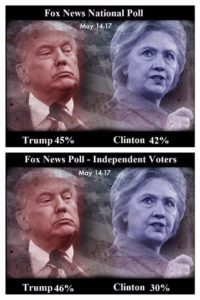 From CNN
Donald Trump holds a slight lead over Hillary Clinton — 45% to 42% — among registered voters, according to a new national Fox News poll.

The lead is within the poll’s 3-point margin of error, but could reflect growing support for the presumptive Republican nominee as the likely Democratic nominee, Clinton, remains mired in a contentious primary fight with rival Bernie Sanders.

Trump’s standing in the poll, released Wednesday, shows an improvement for the billionaire businessman from a Fox national poll in April showing Clinton on top, 48% to 41%.