As I am putting the finishing touches on this article CNN is interrupting their normal programming with “BREAKING NEWS” from Barack Hussein who is taking the time to condemn Donald Trump for his typically male language.

Donald Trump is the whipping boy for the scummy Democrat Party and their official Communications Division, otherwise known as the mainstream media, most recently for having engaged in common locker room banter eleven years ago. BFD!

Below is a partial list of far worse comments by the Wicked Witch of Benghazi, not a single one of which I have ever heard a word of condemnation from the media.

“When are they going to get those fucking retards out of here?!”

Those are the words of Arkansas First Lady Hillary Clinton who was very frustrated that handicapped children weren’t collecting their Easter eggs quickly enough on the lawn of the Arkansas governor’s mansion.

“The children were having a wonderful time. But they were having a v-e-r-y, v-e-r-y, v-e-r-y s-l-o-w time of finding and picking up the Easter eggs,” wrote Dolly Kyle in her book, “Hillary the Other Woman: A Political Memoir.” Kyle was the childhood sweetheart of Bill Clinton who had a three-decade relationship with Slick Willie.

“Hillary had enough,” Kyle continued…. “‘When are they going to get those f—ing ree-tards out of here?'”

According to WND, Kyle recounted the story as told to her by Arkansas State Police troopers and Louise, a mutual friend of both Kyle and the Clintons and a longtime advocate of what was then the Arkansas Association for Retarded Citizens.

Below is a partial list of other Hitlery cursing rages. THIS is the woman the mainstream media and the Democrat Party want with her finger on the nuclear button. While Trump is being crucified for private, casual locker room comments among buddies, the same sort of comments that every normal, postpubescent American male I have ever known has said and said often, Monica Lewinsky’s ex-boyfriend’s wife makes comments like the “fucking retards” comment above, as well as those those below, and there is ZERO accountability.

Hillary Clinton is EVIL personified, and the demonic forces behind the scenes and in the mainstream media are doing all they can to shove her and her insanity down the throats of We the People! I urge all patriotic Americans to resist their attempts at character assassination. It will only get worse. Ignore it. Stay strong, let’s get Donald Trump into the White House where he can dismantle the broken Washington status quo and Make America Great Again. And, by all means, boycott the mainstream media. Look up their advertisers and boycott them as well. 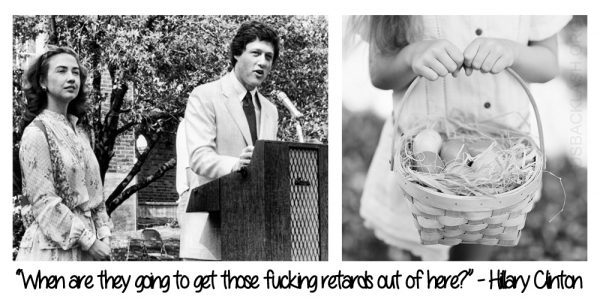 From TruthFeed
(1) “Where is the God damn flag? I want the God damn fucking flag up every morning at fucking sunrise”. Hillary to staff at the Arkansas Governor’s mansion on Labor Day 1991. From the book “Inside the White House” by Ronald Kessler, p. 244

(2) “Fuck off! It’s enough I have to see you shit-kickers every day! I’m not going to talk to you, too! Just do your Goddamn job and keep your mouth shut.” Hillary to her State Trooper bodyguards after one of them greeted her with “Good Morning.” From the book “America Evita” by Christopher Anderson, p.90

(3) “If you want to remain on this detail, get your fucking ass over here and grab those bags!” Hillary to a Secret Service Agent who was reluctant to carry her luggage because he wanted to keep his hands free in case of an incident. From the book “The First Partner” p. 25

(4) “Stay the fuck back, stay the fuck back away from me! Don’t come within ten yards of me, or else! Just fucking do as I say, Okay!!?” Hillary screaming at her Secret Service detail. From the book “Unlimited Access” by Clinton ‘s FBI Agent-in-Charge, Gary Aldridge, p.139

(5) “Where’s the miserable cock sucker?” (otherwise known as “Bill Clinton”) Hillary shouting at a Secret Service officer. From the book “The Truth about Hillary” by Edward Klein, p. 5

(6) “You fucking idiot” Hillary to a State Trooper who was driving her to an event. From the book “Crossfire” ~pg. 84

(7) “Put this on the ground! I left my sunglasses in the limo. I need those fucking sunglasses! We need to go back!” Hillary to Marine One helicopter pilot to turn back while in route to Air Force One. From the book ” Dereliction of Duty” p. 71-72

(8) “Come on Bill, put your dick up! You can’t fuck her here!!” Hillary to Gov. Bill Clinton when she spots him talking with an attractive female. From the book “Inside the White House” by Ronald Kessler, p. 243

And Donald Trump is being crucified for locker room banter? Really? 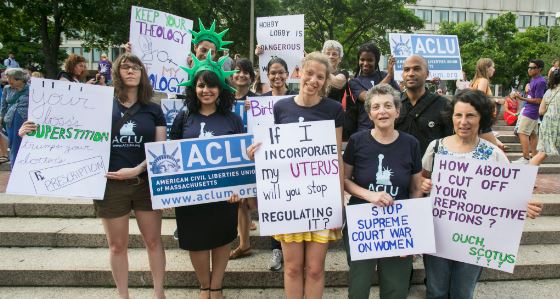