An historical record of Muslim violence against the civilized world, and a personal anecdote

Planned domination is not a new concept in Islam. The civilized world, especially Europe, has been fighting this menace for centuries, and many millions of innocent people have died as a result.

Powdered Wig contributor, Joe LaVeque, lists the Muslim criminal acts against the rest of the planet (infidels) in the article below. However, I can think of one that was not mentioned, the April 5, 1986 German disco bombing.

According to Wikipedia, “On 5 April 1986, Libyan agents bombed “La Belle” nightclub in West Berlin, killing three people, one being a U.S. Serviceman,[7] and injuring 229 people who were spending the evening there. West Germany and the United States obtained cable transcripts from Libyan agents in East Germany who were involved in the attack.”

I was a young Army captain at the time, stationed near Pisa, Italy, and I was indirectly affected by this incident and President Reagan’s response, sending missiles through Gaddafi’s tent flaps.

I had been selected to take command of a company near Frankfort, Germany, and had hopped a military flight to Rhein Main Airbase. It was that night that Reagan bombed Libya, targeting Gaddafi. When I awoke the next morning, Rhein Main was in virtual lockdown. Due to increased security it took hours to get off base to visit the unit and my new battalion commander. We discussed the unit and my impending move.

I then traveled to Army headquarters in Heidelberg to process the paperwork for the move and catch a train back to Pisa. It was nearly midnight when I boarded the train for Italy, and I noticed something unusual. Young Muslim men. Lots of young Muslim men, appearing to be 20 to 35 years in age. Up to that time, I don’t recall having seen many Muslims at all in Europe, but that night there were many more Muslims at the train station than I had seen in all the previous time I had spent in Europe.

I bought my ticket and headed for the train. Boarding, I again noticed a disproportionate number of young Muslim men. Searching for an empty cabin, I walked down the aisle and most of the cabins were occupied…. with from one to four young Muslim men. In view of what had just happened in Libya, it was disconcerting to say the least. I found an empty cabin and was settling in for the long ride to Pisa. Shortly thereafter a Muslim man who appeared to be in his early 30s entered my cabin and took the seat across from me. It was clear that he knew I was an American GI. In broken English he questioned me, asking where I was stationed, what part of the US I was from, and explaining that he was a Syrian tourist. I spoke only Italian to my newfound companion, which he couldn’t understand or speak. I answered all of his probing questions with, “no lo so, Italian for “I don’t know.”

Then he wanted to see my passport. “No lo so,” I replied. So he reached over onto my bench to grab my briefcase, which I had laying beside me. I shoved him back onto his seat and he began laughing hysterically. Trying to convince me to go to the dining car with him, I answered, “no lo so.” As he got up and walked off to the dining car, I grabbed my gear and exited the train at the next stop.

I caught the next train back to Heidelberg to report to the Staff Duty Officer and intel people what was going on. They said they were aware of what was happening, the mass movement of young Muslim men, and explained what they believed was going on, all of which I can’t reveal here as it may still be classified. I can only say that the hundreds of young Muslim men I saw that night were apparently changing addresses, presumably to keep Interpol from tracking them. I believe these Muslim men were agents for the Middle Eastern countries they came from, and were simply awaiting instructions.

So, if there were hundreds of these young Muslim men (agents) in Heidelberg that night, how many were there throughout Germany? Europe? How many more are in Europe now? Judging by what is happening in Europe today, MANY more!

Donald Trump is right. If we don’t strictly control our immigration and our borders, we are inviting the misery Europe is suffering from now. 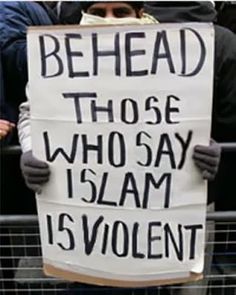 The war started in the 7th century and lasted through the 17th century. I would contend it’s never stopped, but the facts below are historically correct.

This is why I choke when I hear someone say we will defeat or contain these Islamic terrorists in a few years, or even 30 years, as recently stated by Leon Panetta.

If the latest batch of murders, beheadings, and killing of innocent Christians has shocked you, maybe you should read this compilation of historical facts about the hatred of Muslims for all who are not Muslims.

This is factually (and historically) correct – and fully verifiable:

In 732 A.D. the Muslim Army, which was moving on Paris, was defeated and turned back at Tours, France, by Charles Martell.

In 1571 A.D. the Muslim Army/Navy was defeated by the Italians and Austrians as they tried to cross the Mediterranean to attack southern Europe in the Battle of Lepanto.

In 1683 A.D. the Turkish Muslim Army, attacking Eastern Europe, was finally defeated in the Battle of Vienna by German and Polish Christian Armies.

This crap has been going on for 1,400 years, and half of the politicians don’t even know it.

If these battles had not been won, we might be speaking Arabic and Christianity could be non-existent; Judaism certainly would not exist.

Reflecting: A lot of Americans have become so insulated from reality that they imagine that America can suffer defeat without any inconvenience to themselves. Pause a moment and reflect back.

These events are actual events from history. They really happened! Do you remember?

2. In 1972, at the Munich Olympics, Israeli athletes were kidnapped and massacred by Muslim males.

3. In 1972, a Pan Am 747 was hijacked and eventually diverted to Cairo where a fuse was lit on final approach.
Shortly after landing it was blown up by Muslim males.

6. During the 1980’s a number of Americans were kidnapped in Lebanon by Muslim males.

7. In 1983, the US Marine barracks in Beirut was blown up by Muslim males.

8. In 1985, the cruise ship Achille Lauro was hijacked and a 70-year old American passenger was murdered and thrown overboard in his wheelchair by Muslim males.

9. In 1985, TWA flight 847 was hijacked at Athens , and a US Navy diver trying to rescue passengers was murdered by Muslim males.

11. In 1993, the World Trade Center was bombed the first time by Muslim males.

12. In 1998, the US embassies in Kenya and Tanzania were bombed by Muslim males.

13. On 9/11/01, four airliners were hijacked; two were used as missiles to take down the World Trade Centers and of the remaining two, one crashed into the US Pentagon and the other was diverted and crashed by the passengers. Thousands of people were killed by Muslim males.

14. In 2002, the United States fought a war in Afghanistan against Muslim males.

15. In 2002, reporter Daniel Pearl was kidnapped and beheaded by – you guessed it – a Muslim male. (Plus two other American journalists who were just recently beheaded).

16. In 2013, the Boston Marathon bombing resulted in 4 Innocent people, (including a child) being killed and 264 people injured by Muslim males.

17. On December 2, 2015, 14 people were killed and 22 were seriously injured in a terrorist attack at the Inland Regional Center in San Bernardino, California, which consisted of a mass shooting and an attempted bombing. The perpetrators, Syed Rizwan Farook and Tashfeen Malik, a married Muslim couple.

No Obama, I really don’t see a pattern here to justify profiling, do you? So, to ensure we Americans never offend anyone, particularly fanatics intent on killing us, airport security screeners will no longer be allowed to profile certain people.

So, ask yourself “Just how stupid are we???”

Absolutely No Profiling! They must conduct random searches of 80-year-old women, little kids, airline pilots with proper identification, secret agents who are members of the Obama’s security detail, 85-year-old Congressmen with metal hips, and Medal of Honor winner and former Governor Joe Foss, BUT……..leave Muslim Males alone lest we be guilty of profiling.

Ask yourself, “Just how stupid are we?” Have the American people completely lost their minds or just their Power of Reason???

Let’s send this to as many people as we can so that the Gloria Alred’s and other stupid attorneys; along with Federal Justices, that want to thwart common sense, feel ashamed of themselves — if they have any such sense.

As the writer of the award winning story “Forrest Gump ” so aptly put it, “Stupid Is as Stupid Does.”

OR JUST SIT BACK, KEEP GRIPING, AND DO NOTHING. AS OBAMA SAID IN HIS BOOK “NOTHING SOUNDS AS BEAUTIFUL AS THE MUSLIM EVENING PRAYERS FROM THE TOWER.”