I remain perplexed by liberal weenies who cannot connect the dots between strict gun control and a defenseless population, sitting ducks for criminals who will always have guns regardless of how many laws are passed prohibiting them.

Most private guns in Mexico are in the hands of the drug cartels. It is very difficult for regular citizens to own guns as availability is tightly controlled (Mexico has ONE gun shop in the country, in Mexico City). 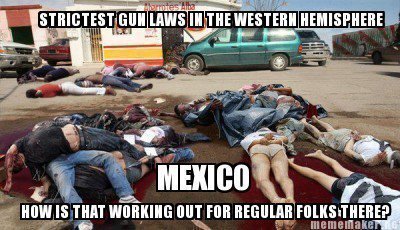 2017 may have been the worst year for homicide in Mexico since the government began keeping track in the 1990s, according to Zero Hedge.

It’s a safe bet that the homicide rate isn’t coming anywhere near what it was in the years surrounding the revolution 100 years ago. But it may be the worst rate in several decades.

The Interior Ministry said authorities across Mexico opened 29,168 murder cases, saying that it put the country’s homicide rate at 20.5 per 100,000 inhabitants.

The highest figure ever recorded in Mexico before last year was in 2011, during the peak of the Mexican government’s war on drugs. That year, authorities recorded 22,409 homicides.

Unfortunately, some observers think the Mexican state is fudging the numbers:

However, experts have cast doubt on the latest figures, saying the homicide rate is likely much higher.

Mexican security analysts Alejandro Hope told AP news agency that the figure is based on the number of murder investigations opened last year, not the number of victims.

Hope added that it also doesn’t take into account that a killing may result in more than one victim. He placed the homicide rate closer to 24 per 100,000 inhabitants.

Why Are Rates So High?

Violent crime may be Mexico’s largest problem for its economy, growth, and its standard of living. In recent decades, Mexico has moved beyond single-party political rule. It now has competitive elections in more than name only. It has several metropolitan areas which are — outside of the crime issue — considered good places to do business.  It is increasingly connected to the global economy. The UN ranks it “high” on its Human Development Index. Along with other rapidly modernizing Latin American Countries like Chile, Argentina, Uruguay, and Panama, it would be very wrong to call Mexico a “third world” country.

So why the persistent violent crime?

This is one of those issues that has no simple answer. Part of the problem is due to a lack of local control. Some is due to the Drug War — as is the case in the US and other countries. Part is due to demographics.

This doesn’t stop some commentators, though, from attempting to assign easy explanations to the problem.

One such recent trend in polemics is found among gun-control advocates who attempt to blame Mexico’s crime woes on the availability of small arms in the United States.

Unlike the United States, though, Mexico has relatively strict gun laws. As Vox notes:

Mexico is one of the few countries that, like the US, guarantees the right to bear arms in its constitution. Still, Mexico maintains some fairly strict gun laws: All guns must be registered through the federal government, carrying a gun requires a license, sales are legally limited to one store in Mexico City, and carrying licenses can be taken away at the federal government’s discretion.

So, like much of Latin America, Mexico is a country with strict gun laws, but high homicide rates.

So how to explain the problem?

Well, in the case of Mexico, the answer for gun control activists is to blame the United States: “one way for Mexicans to get around their country’s strict gun laws is to simply walk across the border.”

The logic proceeds accordingly: The presence of more guns means more homicide. And, although Mexico has strict gun laws, Mexico is unfortunately located close to the United States where guns can be easily purchased. Guns are then introduced into Mexico where they drive a higher homicide rate.

There are some problems with this logic. Even if we account for all the black-market guns in Mexico, gun totals are still much higher in the US. That is, according to the 2007 Small Arms Survey, it is estimated that there are around 15 million privately-held guns in Mexico, on the high end. Even accounting for an additional increase since 2007, we’re looking at a rate of fewer than 20 guns per 100 people in Mexico. In the United States, on the other hand, that total is around 100 guns per 100 people.

So, if one is going to pin Mexico’s violence problem on “more guns,” they have to account for why there are more than five times as many guns in the US, with only a small fraction of the homicides.

After all, it’s not as if Latin America has no locally produced firearms. The Small Arms Survey notes:

Latin America has a long tradition of gun production, with some manufacturers tracing their history back many decades. Brazil has the largest arms industry in the region, followed by Argentina. Firearms are also produced by private or government-owned industries in Bolivia, Chile, Colombia, Ecuador, Mexico, Paraguay, Peru, and Venezuela. While most of the production is intended to equip the military and law enforcement institutions, some of the production is for private use. Research shows that, “[w]ith the important exceptions of major exporters led by Argentina, Chile, Mexico, and above all Brazil, [Latin America’s] small arms producers tend to be niche manufacturers, serving captive local markets.”

So Mexico contains local arms-producing manufacturers to the point that some are “major exporters” who also produce arms for government institutions. And government stockpiles are a source for black markets as well.

Even worse, the same government institutions that work to keep firearms out of the hands of peaceful private citizens, are often in league with the cartels. As a recent New York Times article noted about local resistance to cartel-sown chaos, “Townspeople formed militias to eject both the cartel, which effectively controlled much of Michoacán, and the local police, who were seen as complicit.”

In other words, there is often no clear line between law enforcement and the cartels themselves.

Often, official law enforcement simply can’t be bothered. Things are even worse when, as  one cartel member put it, “soldiers and cops are … really on our side.”

Thus, it shouldn’t exactly be a surprise that many of the guns seized in Mexico are coming from official government sources.

It requires quite a bit of creativity to then take these facts and twist them into a narrative which concludes “too many guns in Texas leads to more Mexican homicide.” If Texan guns are fueling homicide in neighboring jurisdictions, why aren’t US states close to Texas experiencing similar problems?

Moreover, increases in gun totals over time in the United States have not shown increases in homicides. In fact, the opposite is true. According to statistics from the Bureau of Alcohol, Tobacco, and Firearms, new guns manufactured in the United States, since 2011, have been more than double what they were throughout most of the past thirty years. Total gun production rapidly increased from 2001 to 2013, yet, homicide rates were cut in half from the 1990s to today. Although homicide rates have trended up in the past two years, they remain near 50-year lows.

It’s difficult to see how greater gun restrictions have helped Mexico. In practice, the restrictions discourage ownership by peaceful people while ensuring that cartels and official state agencies are the only armed groups. And both groups are often in league with each other. Ordinary people are then caught defenseless in the crossfire.

Attempts at blaming Mexican violence on American guns ignores the fact that there are several times more guns in the US, but without the Mexico-like homicide rates.

Indeed, some American border towns have low homicide rates, even by American standards. The homicide rate in El Paso, Texas, for example, was a very low 2.7 per 100,000 in 2016. Just across the Rio Grande, the city of Juarez is one of the murder capitals of the world. Moreover, 80 percent of El Paso residents are of Hispanic — primarily Mexican — origin, meaning we can’t even resort to a bigoted explanation about how Mexican ethnicity leads to more violence.

So, why should it be outlandish to conclude that Mexican gun control might be an important factor? After all, on the southern side of the border, guns are reserved for cartels and often-corrupt police officials. Has this situation increased the quality of life of average Mexicans? It’s hard to see how.