The big news Wednesday night was an Antifa group, Smash Racism DC, vandalizing Tucker Carlson’s home, attempting to break down the front door as Carlson’s terrified wife and children were inside.

Michael Isaacson, a professor and Antifa member, who has been interviewed by Carlson numerous times (links here and here), founded the Antifa group Smash Racism DC, although he denies any current connection.

Among other strange beliefs, Isaacson believes that Antifa has a right to physically assault conservatives and Trump supporters and he believes dead cops is a good thing. 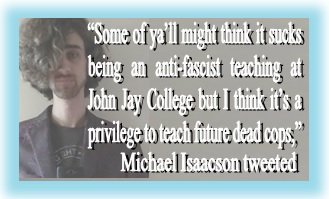 Giraffeman also has a blog, Vulgar Economics (excerpt, below). Check out this entry the day after the SRDC vandalism and attempted breaking and entering at Carlson’s house….

Tucker Carlson Is the Paragon of Crocodile Tears

A few weeks ago, my friend, who is actually in Smash Racism DC (I haven’t been art of the organization for three years) send me a pastebin doxx of Tucker Carlson and a few other far right personalities, so I probably should have seen this coming. SRDC has really been on fire with the doxxes as of late. Anyway, last night my SRDC comrades engaged in what’s known as ‘grassroots lobbying’ – showing up at a powerful person’s doorstep, usually at night, and generally making as much noise as possible.

Now Tucker Carlson is crying. He is afraid for his family even! From USA Today:

“Here’s the problem, I have four children,” he told Fox. “I never thought twice about leaving them home alone, but this is the reaction because this group doesn’t like my TV show.

The fact is, Tucker has used his platform to strike fear into millions of people every night from the comfort of his own studio. His eliminationist politics of racial purity influences policy to bring ICE agents to the doorsteps of thousands. He influences policy to ensure that pigs who shoot children are let off the hook. Tucker can cry all he wants, this is just chickens coming home to roost.

The DC Criminals Are At It Again – Depriving Citizens Of Their Rights Under The Guise Of Protection
January 18th, 2021 Sons of Liberty Media

Richard Grenell claims ‘she’ will be ‘shadow president’ — and he does not mean Kamala
January 18th, 2021 Liberty Unyielding
Contact us