VIDEO: Love it! Check out gay patriot Scott Presler stumping for Trump at Starbucks. ‘Dems Don’t Own Me’

Someone get this man a MAGA hat!

Meet Scott Presler, an openly gay Trump supporter in Las Vegas where Scott used a Starbucks as a Trump-stumping venue.

Scott’s goal was to ensure that patrons at Starbucks were registered to vote at their current addresses. The fact that he chose a cafe typically dominated by liberals makes it clear that he was also looking for independents and Democrats to convert to President Trump’s pro-America agenda.

And, lest you think Scott is a one-trick pony, let it be known that he is all MAGA, all the time! 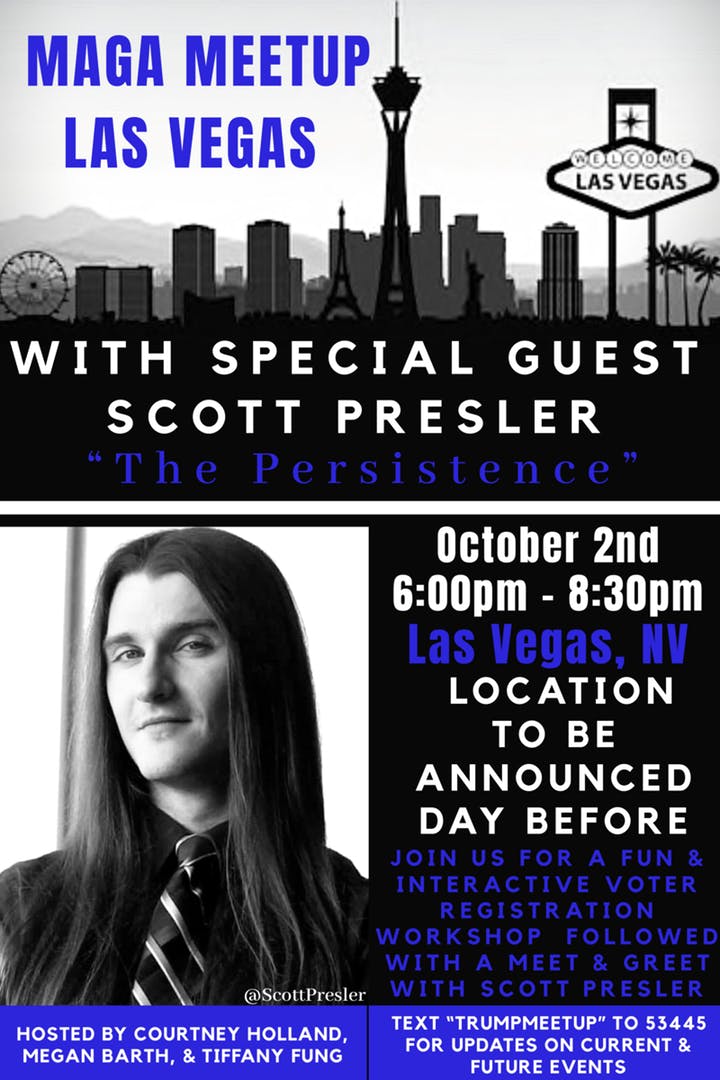 Come to our next #MAGA Meetup: Las Vegas with special guest, Scott Presler aka “The Persistence” on October 2nd.

We are excited to announce that our next #MAGA Meetup will be Wednesday, October 2nd at 6pm with special guest, Scott Presler aka “The Persistence”. Scott will be leading a fun and interactive voter registration training followed by a mixer and opportunity to meet Scott. As with our past events, this is a free and public event.

Scott Presler spent 2 years of his life working to defeat Hillary Clinton. Now, with over 331,000 followers on Twitter, he’s dedicating his time to reelecting President Trump in 2020. Scott travels around the country to teach others how to register NEW Republican voters.

This event will be held at BLVD & Main Tap House inside The Strat Hotel and Casino located at 2000 S. Las Vegas Blvd, Las Vegas, NV 89104. Admission will be granted on a first come, first serve basis, and your ticket does not guarantee your admission. Once the room reaches full occupancy, the doors will be shut so we recommend you arrive early.

We want to reiterate that this is an unofficial and free event that is not affiliated with the Trump Campaign or with the state or national GOP. This is supposed to be a casual evening to just meet and network with other President Trump supporters and a great opportunity to meet Scott Presler.

This event is being hosted by Courtney Holland, Megan Barth, and Tiffany Fung. Please let us know if you have any questions.

If you want to stay in touch for current and future events here in Las Vegas, text “TrumpMeetUp” to 53445.

We are excited to see you all there!

Judicial appointments have longer lasting effects than any one tax cut or executive order.

Everything else is icing on the cake. It’s been a lot of icing.

People moved here from California and brought their liberal politics with them. Most of Nevada is republican but not Clark County

Scott is also very busy organizing citizens to clean up our inner cities. He may have more energy than President Trump!

And, like President Trump, no good deed that Scott does goes unpunished. Watch these liberal haters slam Scott for his good work, suggesting that the unsanitary dump of a community in Baltimore didn’t need to be cleaned up, it needed jobs and that Scott’s good deed was just a pro-Trump political stunt. Scott should have told them that he didn’t have any jobs to give them, but he could bend over and pick up trash that they are too lazy to pick up.

Because of Scott’s pro-America and pro-Trump advocacy, he is now being labeled a “right-wing extremist,” which, of course, in the liberal lexicon, is synonymous with white nationalist, white supremacist, racist, and neo-Nazi.