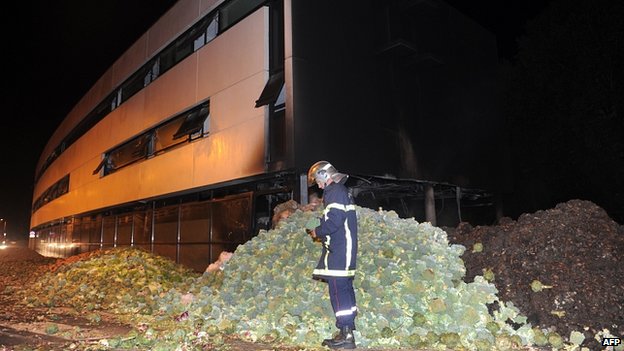 Piles of vegetables were dumped outside the tax office in Morlaix

French vegetable farmers protesting against falling living standards have set fire to tax and insurance offices in town of Morlaix, in Brittany.

The farmers used tractors and trailers to dump artichokes, cauliflowers and manure in the streets and also smashed windows, police said.

The farmers say they cannot cope with falling prices for their products.

A Russian embargo on some Western goods – imposed over the Ukraine crisis – has blocked off one of their main export markets.

About 100 farmers first launched an overnight attack on an insurance office outside Morlaix, which they set light to and completely destroyed, officials said.

They then drove their tractors to the main tax office in the town where they dumped unsold artichokes and cauliflowers, smashed windows and then set the building on fire.

French media said the farmers then blocked a busy main road in Morlaix in both directions.

In a statement, Mr Valls “vigorously” condemned the “looting and destruction by fire” of the buildings.

He said violence was not justified and the perpetrators would be prosecuted. 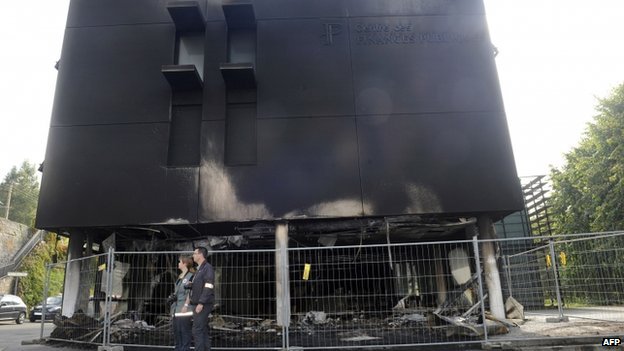 Many French farmers say they cannot survive with falling prices

“It is particularly shocking that firefighters were prevented from accomplishing their mission,” he said.

Farming and the food industry are significant employers in Brittany. There have been a number of protests against the government’s tax policies. 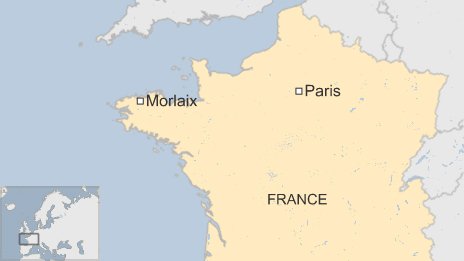