Breaking! They’re heeeeeere! First load of 10,000 Syrian refugees has arrived in New Orleans, being resettled into 180 unsuspecting US communities

Photo, above: Muslim refugees. This photo was not taken in New Orleans. This is a stock photo of Muslim refugees in Europe. See any women and children in this group?

UPDATE: We have received a few isolated criticisms of this story, which breaks our hearts as we put a great deal of time and effort into searching for breaking news and vetting the sources. The criticisms stem mainly from readers who have commented that the accompanying photo (above) was not taken in New Orleans, which is correct, and was clearly spelled out in the caption. This photo is a stock photo of Syrian refugees in Europe, as we could find no photos of the actual Louisiana refugees. There are reportedly 14 Muslim refugees now in New Orleans. The following photo is of two Syrian refugee families. Whether this photo is of the actual families who recently arrived in New Orleans, we are not sure. However, we have vetted the photo through several credible sources as it accompanies many other editions of this story from those credible sources. The photo (below) is from an article on the topic from Jews News and Western Journalism. We hope this clears things up and prevents future accusations of yellow, sensationalist journalism. This is the first installment of Barack Hussein’s planned 10,000 refugees, and reports are that there are much more than 10,000 planned to immigrate to the US. Link to the Jews News article on the same story…. Syrian refugees in Louisiana 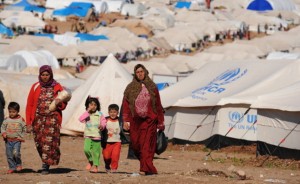 President Barack Hussein promised that he would be sending thousands of Syrian refugees to the US. Well, he is keeping that promise!

The first transport of refugees arrived in New Orleans recently and will be resettled in Louisiana and 180 other American communities. See the list below to find a town close to you.

So, it costs $16,000  a copy to resettle these Islamists into the United States. What the hell, we can afford it, right? NOT! We are rapidly approaching $20 trillion in federal debt. Stop the bleeding!

From John Binder, The Hayride

After the Hayride broke the exclusive story on 10,000 Syrian refugees possibly resettling in Baton Rouge, Lafayette and Metairie, it has now come to light that refugees are already coming into the New Orleans area.

Catholic Charities, which receive federal grants from U.S. Department of State/Bureau of Population, Refugees and Migration, have apparently taken in two Syrian refugee families already and are expecting many more.

There are approximately 180 cities in the country that are eligible to accept the 10,000 Syrian refugees. Here is the full list of those cities, which includes Baton Rouge, Matairie and Lafayette:

The 10,000 Syrian refugees are first flown to the United States, according to the French news wire Agence France-Presse, with the State Department paying the International Organization for Migration (IOM) for the airfare.

Then, once the refugees arrive in the country, they could be dispersed across the 180 cities listed above, where they are to aided within the first 30 to 90 days in settling and finding employment in the area.

After approximately 90 days, refugees are no longer eligible for the State Department-funded support that they were receiving through migrant and refugee services. However, they are able to join support programs through the Department of Health and Human Services.

Additionally, it is unclear how much the screening process for the 10,000 Syrian refugees will cost American taxpayers.

The State Department spent $1.1 billion resettling people from around the world in the country last year. That’s about $16,000 per person.