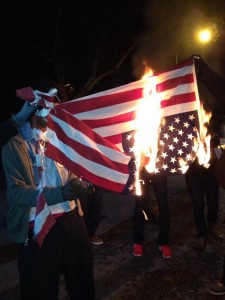 The streets near Ferguson were literally on fire Thursday night with protesters chanting for the death of Officer Darren Wilson, the cop who fatally shot Michael Brown. In the Shaw neighborhood for a second night, they vandalized homes, committed assaults, blocked traffic and threw knives at police. This is hot on the heels of the shooting of a black teen with a lengthy criminal record on Wednesday.

Police say felon Vonderrit D. Myers fired three shots at a white officer before being shot and killed. Myers’ parents maintain that he was unarmed at the time of the shooting but Myers’ had a felony gun conviction on his record and was wearing an ankle monitor while a stolen 9mm Ruger was found at the scene.

Despite all of the evidence that the shooting was justified, the crowd remained undeterred. Seemingly oblivious or unconcerned with the facts of the Myers case, the protesters have used this latest police shooting as a springboard to fuel more unrest.

The protesters have been demanding the indictment of Darren Wilson over the past two days. However on Thursday night they became more volatile, calling for the officer’s death and marching through “wealthy,” “white” neighborhoods, as USA Today reporter Yamiche Alcindor, who was on the scene, reported.