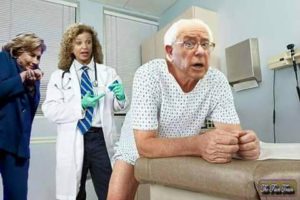 H/T The Horn, via Joe LaVeque

Bernie Sanders has left the Democrat Party. Who can blame him? He has only been a Democrat for a year and the party to which he swore his loyalty has hosed him royally.

Sanders made the announcement during a breakfast meeting with reporters last Tuesday, the second day of the Democrat National Convention. So, apparently, The Bern had already seen the handwriting on the wall, thanks to Wikileaks.

Bernie Sanders joined the Democrat Party in 2015, ostensibly to run for president. He has seen enough and is returning to the Senate as an independent. I wonder if he will still caucus with the Democrats, which he has historically done.

Bernie Sanders tells @bpolitics breakfast w/reporters he'll return to the Senate as an Independent, not a Dem: 'I was elected as an Ind.'

Tweet, below: The Convention Center after Bernie Sanders’ delegates walked out

Par for the course, speaking to half empty rooms is her thing!!! Lol! #DemExitNow😂😂 pic.twitter.com/Lor0IxXP1N