Over 100 conservative Facebook employees (yeah I know, who knew?) join employee message board to protest the company’s “intolerant” liberal culture

Over 100 conservatives, employed at Facebook, have begun a Facebook group to protest the “intolerant” liberal monoculture that exists within the company. They are protesting the unfair, un-American manipulation of conservative publishers by the overwhelmingly liberal powers that be within the social media giant.

The Facebook group, “FB’ers for Political Diversity,” of which I am now a proud member, is an oasis of liberty and clear vision within a Facebook desert of fascism, tyranny, and control freak manipulation.

My first question is how did that many patriots find their way into Facebook to begin with? Oh, well, I am damned glad you are there!

Facebook, which I regularly refer to as “Fascistbook,” but from which I will refrain for the remainder of this article, has clearly been guilty of manipulating conservative publishers to make us as invisible as possible within the marketplace.

We are shadowbanned on Twitter, receiving almost no traffic. My Twitter engagement is practically zero, which means my posts are virtually invisible. I doubt that one in one-thousand tweeters can actually see my posts. I am literally shocked when one of my tweets receives a like or a retweet.

As for Facebook, we are constantly punished, sentenced to Fascistbook jail often. As always, our alleged transgressions are unspecified “violations of community standards,” i.e., “conservative.”

As a young internet publishing concern, Powdered Wig has relied heavily upon Facebook for its marketing. Below the Fascistbook radar in the beginning, we were permitted free access to the market and allowed to navigate freely the then-reasonably-open Facebook audience. And we prospered and grew.

Then came our immediate and full support for Donald Trump for President. From the now-famous escalator ride and announcement of his candidacy and platform, Powdered Wig was MAGA to the Max!

Trump was saying what many of us in the right-wing blogosphere had been saying forever, except he had a microphone, clout, billions of dollars, and a national political party (sometimes) supporting him. We the People had found our hero, the reincarnation of Ronald Reagan, except even better, as The Donald was just as much a patriot, but understood national and global economics in far greater depth and breadth than did the Gipper.

From our commercial peak prior to the election of President Trump to our new low this month, Powdered Wig’s revenue has dropped by over 98%. Not kidding! How many could survive a salary reduction from $50,000 a year to $873 a year, which is $72.78 per month or $16.79 per week? Our Facebook page weekly reach, once 14 million, is now 200,000. We used to receive on average several hundred new organic likes per day. Now, we may receive 20 or 30 likes a day, but there are typically more unlikes than likes, so we have seen a net loss of likes for several months. From our high of 301,000 likes, we are now down to 298,000 and losing more every month.

UPDATE (9/1/2018): Indicative of Facebook’s manipulation, I published this article on August 30, 2018. This graphic, below, from Powdered Wig’s Facebook stats shows the manipulation by Facebook when you do what the Nazis don’t like. PUNISHMENT!

I had not published anything negative about Facebook for several days, and as you can see, 5 of the previous 7 days showed a net gain in organic likes, albeit a very tiny gain.

Then, I published this article, and, as expected, the day of publication resulted in -7 net likes (12 likes vs. 19 unlikes) and -8 for the following day (8 likes vs. 16 unlikes). 19 of the past 29 days have ended in negative likes. Keep in mind, before the election of President Trump, we were used to seeing several hundred net likes per day. Not kidding!

THIS is the sort of Facebook manipulation we conservative publishers have become used to. 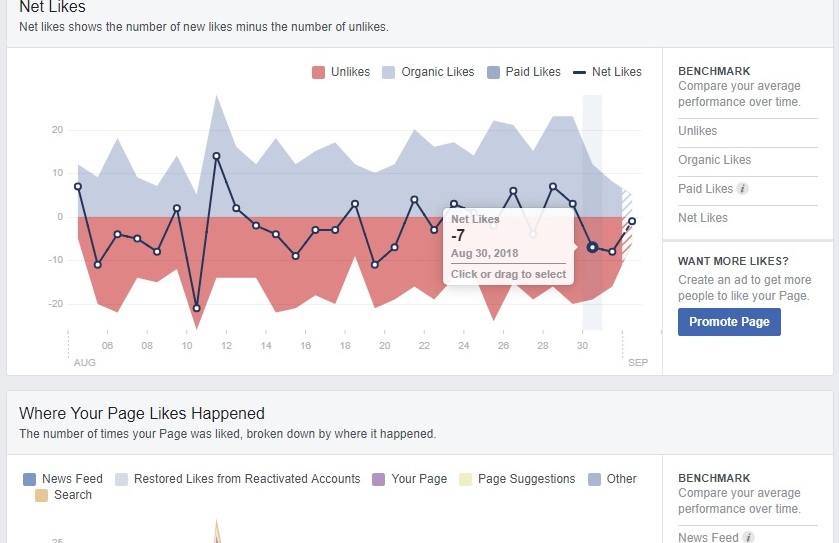 This isn’t only happening to Powdered Wig. It is happening to all conservative publishers and is happening not because of changes we have made in our operation or reporting. It is a conscious, politically-motivated effort by the only ones who can manipulate our Facebook traffic, the intolerant liberal haters at Facebook itself.

I write the same stuff I always have – America-loving, Constitution-supporting, socially- and politically-relevant content with a decided editorial slant to the right. We are simply being rendered invisible by Facebook and Twitter. There can be no other explanation. And for those who may be skeptical of that charge (Shep Smith, et al.), consider this: I belong to a network of over 100 conservative publishers. I am in contact daily with patriot publishers. I KNOW first hand what is happening across the conservative publishing industry. It is the same for all of us. We are doing nothing different than we ever did. Our Facebook, Twitter, and Google presence has magically disappeared. Again, there wasn’t anything we did to make this occur (other than supporting President Trump). We are being manipulated to silence us, clearly a violation of the First Amendment.

This is how egregious Facebook’s behavior is. Imagine your cell phone company eavesdropping on your calls, then punishing you over and over for unspecified “community standards.”

The first time, they cut your phone off for two days without telling you what you said that was wrong. The next time you phone is cut off for two weeks, the third time a month, and when you get your phone “privileges” back, you can only call your own area code. You just get a busy signal with any other area code.

Then, they think up all sorts of new ways to punish you. Like, you having to dial a 50-character prefix to make a phone call. Some of the characters are upper case, some lower case, some numbers, some special symbols. Lots of fun stuff.

Many conservative publishers have disappeared, unable to survive the manipulation. There should clearly be a very large class-action lawsuit somewhere in the future. For the time being, we are all too broke and preoccupied with taking back our country to organize a fight on that front.

The good news is Powdered Wig doesn’t have to make a dime for me to continue writing my reliably red-white-and-blue, star-spangled content. I began Powdered Wig in 2013 as a protest to the treasonous scummery of Barack Hussein and his uber-corrupt administration, a continuation of the corrupt Clinton administration and do-nothing globalist administration of W, who only wanted to wear the hat, to hell with ridding his executive branch of the corruption that was seeded during the Clinton era. W should have drained the swamp when it was in its infancy and much less formidable. Now, as is clear, the task will be monumental, but not one which we patriots or our leader, President Trump, are afraid of or will shy away from.

I began Powdered Wig for patriotic reasons, not commercial reasons. At the time, I had no idea that there was a way to generate any revenue at all from my patriotism and passion, let alone enough to actually derive a living from it. Powdered Wig did not make a dime in its first year of existence, then began attracting a following and thus advertisers, and grew from there. It is the very first job I have ever had that has made any use of my college major, Journalism.

Today, We the People are watching in horror the result of two-plus decades of corruption everywhere within our executive branch, but most visibly within DOJ and the FBI, where career “public servants” who have not been serving America, but rather servicing America, are openly displaying their vile hatred for our country, its people, and President Trump, evident in their testimony before Congress. Career parasites, all of them!

To shamelessly invoke a pair of apropos cliches, the Clinton/Obama onion is being peeled and the worm is turning. We are witness daily to revelations involving the nefarious swamp rats that would have been considered treason or seditious conspiracy in any other time in our nation’s history. We will see how that is treated. I believe we will have a much better vision of that future after the midterm elections.

In the meantime, I tip my hat to my fellow FB’ers for Political Diversity and the Facebook employee patriots who founded it. God Bless you, ladies and gentlemen. Thank you all!

More than one hundred conservative Facebook employees have joined an internal employee message board to protest what they call the company’s “intolerant” liberal culture.

The group, “FB’ers for Political Diversity,” was created last week, The New York Times reported Tuesday, and aims to promote ideological diversity within the company. Facebook’s workforce of more than 25,000 is viewed as largely liberal.

“We are a political monoculture that’s intolerant of different views,” wrote senior Facebook engineer and group cofounder Brian Amerige in a post, The NYT added. “We claim to welcome all perspectives, but are quick to attack — often in mobs — anyone who presents a view that appears to be in opposition to left-leaning ideology.”

Amerige’s post continues to criticize Facebook’s emphasis on racial and gender diversity and how it, along with the company’s overt liberal bias, threatens the “viability as a company.”

Facebook banned a dissenting conservative group in December 2016, Business Insider reported in August 2017. The group, “Facebook Anon,” was an anonymous group chat for supporters of then-candidate Donald Trump. It was shut down for violating Facebook’s policies against anonymous accounts, but Business Insider reported that the talks “turned ugly and … alarmed management.”

“[W]e tear down posters welcoming Trump supporters. We regularly propose removing [tech investor Peter] Thiel from our board because he supported Trump,” Amerige wrote. “We’re quick to suggest firing people who turn out to be misunderstood, and even quicker to conclude our colleagues are bigots.”

Amerige added that Facebook has made “all lives matter” a “fireable offense” and that human resources investigates anyone who dares “criticize Islam’s human rights record.”

Amerige’s concerns are not without any evidence. Facebook cofounder and CEO Mark Zuckerberg has donated to left-leaning campaigns in the 2018 and 2020 elections, The Daily Caller News Foundation reported on Aug. 23.

FB’ers for Political Diversity’s only rule is “if you attack a person’s character, rather than their ideas, you will be banned.”

Programmable Central Bank Digital Currencies Will End All False Sense Of Freedom
May 6th, 2021 Sons of Liberty Media
Contact us