Violators of fascistbook “community standards” are subject to the death penalty. However, fascistbook violating your First Amendment rights is fine!

Radio talk show host, Michael Savage, has fallen victim to the Nazis at fascistbook. Why? For violating fascistbook’s “community standards” when he posted the photo, below, to his facebook page. Apparently, public demonstrations which advocate the brutal execution of those who insult Islam is “free speech,” which is not enjoyed by Michael Savage or anyone else displaying their displeasure with the butchery of innocent people.

Muslim protesters take part in a demonstration outside the Danish embassy in London, Friday Feb. 3, 2006. Hundreds of people protested against the publication of cartoons depicting the Prophet Muhammad. (AP Photo/Lefteris Pitarakis)

I am a blogger. What began as a passion nearly three years ago has become a growing commercial enterprise that is paying the bills, for which I am eternally grateful to my readers and followers. My greatest challenge (in fact it is a daily battle) is marketing, getting my thoughts electronically in front of as many patriots and lovers of liberty as possible. The most difficult part of that challenge is tiptoeing through the miserable minefield we know as facebook. I have had no less than a dozen accounts completely disabled, never to see the light of day again. I have been blocked countless times, restricted from posting and participating in group discussions.

Cyberspace belongs to everyone, not just Fuhrer Zuckerberg.

Always the customer service “professionals” (they are servicing their customers alright!) claim a violation of fascistbook’s “community standards,” shorthand for “whatever the hell Herr Zuckerberg doesn’t like.” They have never found a need to elaborate or specify exactly what violated fascistbook community standards, and you can’t talk to them. There is no phone number, live chat option (which much smaller websites use these days), or even email. You can appeal via fascistbook’s appeal process, which I have done many times and for which I have never received a reply, a comment, a reason that my appeal has not been reviewed, or even an explanation of exactly how I violated fascistbook’s community standards in the first place.

I had intended to post a photo of a beheading here to show an example of what does NOT violate fascistbook community standards, but frankly the photos I have seen are so repulsive I refuse to do it. Of course, you can find these photos all over the internet, including fascistbook. They are apparently protected by the First Amendment, which does not apply to you or me, only to Herr Suckerberg.

For certain, Fuhrer Zuckerberg will consider this post “hate speech” and I will likely be blocked again or possibly have my account completely disabled forever.

I am not a fan of government regulation, in fact I loathe it. However, there should be a First Amendment oversight committee embedded with the authoritarian dungeon we know as facebook to insure that they do NOT violate our First Amendment rights.

Will some html wizard and marketing genius out there please contact me so that we may join forces to create a fascistbook competitor that actually adheres to the First Amendment? I’m serious about this! Of course, it will be viewed as a violation of fascistbook community standards, and this article will disappear from fascistbook forever. So, share this post and share it quickly before the fascistbook gestapo takes it down. 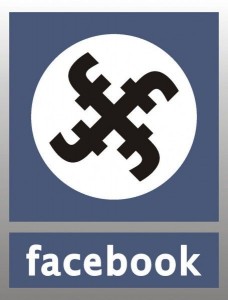 When Muslims held a demonstration in London in 2006 in protest of cartoons depicting their founder, Muhammad, many bore signs warning of beheading and death for “those who insult Islam.”

Talk-radio host Michael Savage thought that amid a fierce national debate on whether or not to allow Muslims to immigrate to the United States, it would be worth considering what has been happening in Europe.

So, he posted on his Facebook page photographs of the Feb. 3, 2006, demonstration outside the Embassy of Denmark in London. The focus of protest was the publication of editorial cartoons depicting Muhammad in the Danish newspaper Jyllands-Posten. Snopes.com verified that the photographs were taken at the London demonstration, with the exception of one, which was from a protest in the English city of Luton.

Michael Savage’s “Government Zero: No Borders, No Language, No Culture” is available now at the WND Superstore

Facebook has not explained why it deleted the post, but it provided a link to its “Community Standards” page, which lists “hate speech” as one of its prohibitions, along with “violence and graphic content,” and nudity.

Messages in placards held up by the London demonstrators included “Behead those who insult Islam,” “Freedom go to hell,” “Europe. Take some lessons from 9/11″ and “Be prepared for the real Holocaust.”

The Facebook post on Savage’s page included text from an email that has circulated for many years:

Why would anyone think that we should be at war with such nice, peaceful Muslims?!

You need to forward this one to everyone! These pictures tell it all!

Muslims have stated that England will be the first country they take over!

These are pictures not shown on American TV or in American Newspapers – WHY?!

They were forwarded by a Canadian friend who thought ALL Americans ought to know!

Savage suspects it was the latter.

He noted that President Recep Tayyip Erdogan of Turkey praised Facebook founder Mark Zuckerberg Thursday for Zuckerberg’s Facebook post Wednesday in support of Muslims who fear “they will be persecuted for the actions of others.”

“What more needs to be said? Erdogan is a dictator who censors all critics, banishes opposition politicians and arrests journalists,” Savage told WND.

“It would be like Hitler congratulating an American media mogul for saying, ‘Not all Germans are Nazis, and Hitler is misunderstood,’” he said.

“How can another Jewish liberal billionaire be committing cultural suicide? Why are liberal Jews so blind to their own survival? Why do they always side with their enemies?”

Savage said it’s only a matter of time before “any and all criticisms of Islam will be considered hate speech by Zuckerberg and the Obama goons.”

“I am banned in Britain and soon banned from Facebook?”

In 2009, Savage was banned from entering the U.K. by Prime Minister Gordon Brown’s government, which lumped him together with Muslim jihadists and leaders of racist groups for “seeking to provoke others to serious criminal acts and fostering hatred,” as WND reported.

Last week, Attorney General Loretta Lynch told a Muslim activist group that she would prosecute anti-Muslim rhetoric that “edges toward violence,” sparking widespread criticism that prompted her to walk back the remarks.